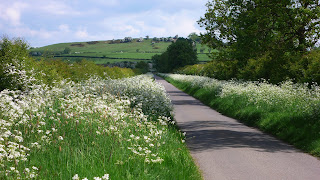 I haven't had a rant for a while. So sitting here looking out over sunlit green pastures with sheep walking from one field to another, swallows flitting from one phone wire to another and Postman Pat bringing me my latest e-bay purchase of Meccano green string (don't ask), I just felt I had to moan about something. And then bingo! This photograph is typical of the lanes around here, old drovers roads dropping down into the Welland Valley that have wide verges that in May suddenly cloud over with billows of white Cow Parsley. Or Cow Parsnip, Queen Anne's Lace, Keck or just Hogweed (Heracleum sphondylium). All of which means absolutely nothing to the local council, who as I blog have sent a man out on a tractor to mow it all down. And not only that, to poison the road edges with a weedkiller that leaves virulent yellow bands down the lanes like a badly-painted parking restriction. So why do they do this. It's that wretched Health & safety mentality again, the crass thought that it's only safe to drive down roads if there's 100% visibility. The same ignorant thinking that gives us the appalling excrescences of giant road signs and digital wagging fingers. Why don't councils realise that if motorists can't see round the corner they'll slow down. And if they don't it's their own stupid fault. Perhaps they should uproot all the hedges. And those trees are a distinct menace. In fact there's far more of a distraction and danger from running into the back of an unpredictable tractor and mower wandering about on the road edge. There. That's it. Back to looking at those sheep.
Posted by Peter Ashley at 12:09

With you whole heartedly there Peter. Tell me. Is that Robin a Tiptoe Hill in the distance? Such a lovely name for a hill.

It's Slawston Hill, and I took the picture with my back to the River Welland, on the road up from the Wheel & Compasses in Weston-by-Welland. Robin a Tiptoe, that other local whale-backed hill, was named after a tall miscreant who survived being hung up there because his toes just touched the ground.

According to the excellent Sue Clifford and Angela King in their England in Particular England's verges cover an area the size of Surrey. They're home to all kinds of plants that are no longer common in fields but hang on by the roadside. Yet local authorities and other ne'er-do-wells persist in mowing them at the wrong times. There's even one road here in the Cotswolds where the owner of a hotel in a village down a nearby lane mows the verge on the main road just so it looks neat to guests arriving at his establishment half a mile away. I suppose he thinks it's a lawn. Bah!

There is a tendency amongst certain farmers round here to mow the verges for miles around their homesteads as if they're for the Chelsea Flower Show. Or as Diplo says "Where do they think they are? Surrey?"

What a lovely photograph. The only possible enhancement? A beautiful van, sign-written perhaps, bowling along on its way to work. On the side it might say something like, ooh, I dunno, "Fred Fibonacci! For all your carpentry needs: big enough to cope, small enough to care". The kek would sweep inwards as the van roared along the lane; bowing in obeisance. Children would run to the ends of dappled driveways throwing flowers before the approaching vehicle, and high net-worth householders would sprint for their Post-It(tm)Notes and Mont Blanc fountain pens, with violet ink, and scribble down the number as this vision of stylish professionalism cruised serenely by.

Ah - rural suburbanisation eh ? Great topic and one sure of generating a record "comment" page. There are a couple of pieces of verge near at hand that do indeed look a bit RHS Chelsea, typically these are in the form of floral jetsam scattered around the base of a sturdy hedge row oak displaying a nasty scar where a late night hot-hatch has parked up a bit abruptly. One particular agricultural leg-cocking, territorial foot stamping, "look-i'm-here-incase-you-couldn't-see-me-in-the-countryside" piece of extended verge mowing has been embellished with the planting of584,000 daffodil bulbs!!!!!! Lord save us - it has been known for traffic to stop, drivers unsure as to whether the're in a garden centre, Surrey Country Club or some footballer's garden.

My own small Cotswold town is 'blessed' with an outbreak of specially planted daffodils on the main approach road from Cheltenham. They're part of the scenery now, and meadow-flower fanciers like me accept them with a wry sigh. It's ironic (as they say) that this should be in Gloucestershire, though. Not so very far from here the smaller, traditional, wild daffodils, the kind that inspired Wordsworth and Housman, grow in profusion in woods and by roadsides.

Blimey. Good old Robin. All there is now is a piece of Diplo like farm epuipment at the top, but it does look vaguely Gibbit like. I shall think of the lucky Robin everytime I drive past.

Oy! wosswivallthesurreyslaggin'? It's not all bleedin' golf courses and manicured virgins. In fact there are very few of the latter. Despite there being more horses than you could shake a spangled stick at churning up the byways, the county has great beauty. Get thee to Surrey Mr.A and with your magik capture wondrous images. Over the border in our neck of the woods one enterprising family used to take their grass cutter drawn behind a trusty Field Marshall and cut the verges for silage. I prefer them left as in your locale though.

Jon, I love Surrey, as we all do. I think we've got places like Weybridge or St.George's Hill in mind, as opposed to the delights of Leith Hill, Coldharbour and Westhumble railway station. Anyway, it was Diplo wot said it. (Points accusing finger)

Ooh, and Norney Grange at Shackleford and the Watts Gallery at Compton. Am I off the hook yet?

With one bound Ashley was free! A mere mention of The Watts Gallery (and chapel) is enough to re-invigorate your credentials (oooh missus)!

I was brought up in Surrey. Much has been ruined by Gatwick Airport and its voracious appetite, the insidious march of Croydon and the demand for 4 bed des res around Reigate. However, a small ride on the Ducati around Redhill Aerodrome may restore some faith...

Driving in England is becoming less pleasurable by the week.In a few weeks time I will be spending a fewe months in california and whilst there will spend considerable time driving the backroads of the Napa valley.No roadsigns,spraying,lights and radar....plus lots of rusty mysteries...sheer pleasure.

You lucky Thud you.

STOP PRESS - with delight I have, this morning, seen a partially mown verge, a huge concrete GPO man-hole cover slightly chewed around the edges and a large pool of oil .... got one !

Excellent sighting Mr.Diplomat, any shards of aluminium amongst that oil to confirm a 'kill'? What's with those geezers charging around on giant ride-on, rear wheel steered lawnmowers shredding plastic bags and frightening old ladies? A Grey Fergie with a set of gang mowers in tow cutting nothing smaller than a playing field, now that's what I call grass maintenance.

Camilla, ride your Ducati along the Pilgrims Way too. Titsey Hill to Westerham despite the M25 being close to the South is most beautiful.

Thud: a slight derail but whilst in Cali, DO go through the Mojave to Amboy, on Old Route 66....road is a bit straight but the environs make it worthwhile!

Re Diplo's comment about the mower missing presumed dead, the partly mown, or half-cut, verge is becoming common around here. Not, I regret, because the mowers are succumbing to concealed manhole covers, but as a kind of halfway house – they cut the couple of yards nearest the road to improve visibility, and leave the rest of the verge for the plants. It's trying to be all things to all men, but ends up looking rather a mess.

Pete been in ? - I don't think so, perhaps all that mown verge has turned to hay and he's too busy rolling about in it .... NEXT !