Fellow travellers in Unmitigated England will know of my passion for the work of S.R.Badmin. And indeed will doubtless share it with equal fervour. So finding an image I hadn't seen before is always a singular joy. Badmin produced many book covers, and indeed also illustrated books of the calibre of the Ladybird Book of Trees and Puffin Picture Books on trees and architecture (Village and Town). So I got very excited by discovering in Chipping Norton The Rolling Road by L.A.G.Strong, and its Badmin cover of which the above is a detail. It's 'The story of Travel on the roads of Britain and the Development of Public Passenger Transport' and this Swift coach sums it all up for me. Was there a Swift Coaches Company around in 1956, and if there was did they paint their vehicles in this sympathetic livery of pale lemon and deep pink? I do hope so. I bet the number plate is SRB something; Badmin often included his name or initials somewhere in the picture other than in the obligatory bottom right hand corner. One book on churches even has his name very prematurely on a tombstone in the foreground.
I had the enormous privilege of taking tea at Mr.Badmin's home in Bignor, West Sussex, with a dear friend in the autumn of 1987. His large living room window looked out at the slopes of the South Downs and my friend said "It must be wonderful for you to have that view of the Downs just outside of your window" and he replied "Too close for me m'dear" and proceeded into the kitchen to put the kettle on. And it's true, so much of his work informs us with loving detail in the foregrounds, but quickly take us off to far horizons.

These days we still always say when confronted by a stand of chestnuts around a farm or a line of willows by a slow-moving stream "Very Badmin" as if nature had decided to copy his work. Nobody 'does' trees like S.R.Badmin, but there's always much more in his paintings. If you can get hold of a copy of Highways & Byways in Essex (the last in the series in 1939, he completed it on the death of F.L.Griggs, the original illustrator) you will see his outstanding line drawings of buildings, such as Bures Mill above. But trees really were the thing. As we left Mr.Badmin's home I noticed that leaves from the trees in his garden had dropped with the rain onto my car. I carefully peeled them off and put them in a church leaflet I found in the glovebox. 'Leaves from Mr.Badmin's Garden' I wrote on the front. I still have it, the leaves now dry and brittle, but still embued with enchanting and very agreeable memories.
Posted by Peter Ashley at 10:58 21 comments: Links to this post

And so to Northumberland with Youngest Son. I'd always wanted to see the painting above, which is one of eight at Wallington Hall (west of Morpeth) and the start of a series commissioned by Pauline and Walter Trevelyan in 1856 to illustrate salient points in Northumberland's history. This one is of a group of workers on Hadrian's Wall being roundly chastised by a Roman commander. The artist's model for this soldier was John Clayton, Town Clerk of Newcastle, who was instrumental in saving stone from Hadrian's Wall being nicked by local farmers for buildings. It is, I think, my favourite Victorian narrative painting.

Thence to Bamburgh, where after a frightening experience in our hotel with what we thought were possibly onions in a steak sandwich, we fled to the beach where YS went fully-clothed into the sea whilst I waited for the sun to appear from behind a static mackerelly cloud to light the castle. One of the most impressive sights in England, this colossus is a quarter of a mile long and covers eight acres or so. I've always loved it since seeing it used as seventeenth century Loudun in an establishing shot in Ken Russell's The Devils (1971), complete with a foreground of a skeletal corpse tied to a cartwheel on top of a pole. Dear Ken, I do miss him.

After these disturbing thoughts we moved swiftly on to Holy Island the next morning. What a romantic place to spend time in, providing you've read the tide timetables coherently. The beaches with sea-washed bricks and tiles (always an Unmitigated Pleasure), the fishermen's huts made from upturned boats, (are they really, or did they just use boatbuilding skills?), a gaunt ruined abbey and of course the showstopper of Lindisfarne Castle. Built by Edwin Lutyens for his mate Edward Hudson (the founder of Country Life magazine) in 1902, this is the ultimate holiday home. Shades of Enid Blyton's Five on a Treasure Island perhaps, or Tintin's Black Island, this was a sixteenth century castle on an outstanding plug of rock, abandoned in the mid nineteenth century until Hudson discovered it. 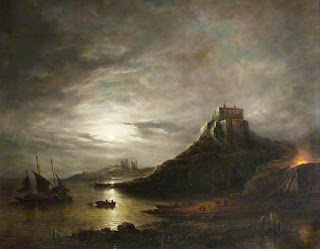 This is a painting by John Moore, showing the original castle in 1877, complete with the nearby limekilns in action and the abbey in the distance. I too needed a memorable image, so got very excited in the tiny scullery when for only about two minutes the top of a tap was highlighted. As this was the hottest day of the year thus far it seemed somehow very refreshing. Although when I pointed this photo opportunity out to other castle gazers they quickly turned and went sniggering outside to look at seals through a telescope on the Upper Battery. Oh well.

Not wanting to find we were stuck out here until six o'clock we walked with long purposeful strides to the distant car park, our heads whirring with thoughts and stuck into big ice creams. We will return, next time maybe in the depths of winter with an easterly gale blowing, the threat of Northumberland snow in the bitter air and firelight in Lutyens' hearths lighting the herringboned-patterned brick floors.


Both Wallington Hall and Lindisfarne Castle are National Trust properties, and Moore's painting can be seen at the latter. Thank you NT.
Posted by Peter Ashley at 15:38 5 comments: Links to this post 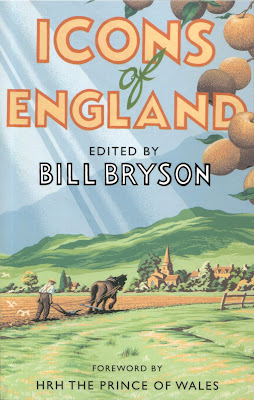 Once upon a time I was asked to contribute to this, originally a big full colour book edited by Bill Bryson, who at the time was Chairman or something of the Campaign to Protect Rural England. I was very pleased to be included in a list of contributors that included Kate Adie on gnomes and Benjamin Zephaniah on the Malvern Hills. And what a launch party we had. Michael Wood (Alfred's Cakes) brought along his John Mayall's Blues Breakers LP, the one with Eric Clapton (Newlands Corner) reading the Beano on the cover, in the hope that Eric would be there to sign it. He wasn't. I kept looking for Richard Mabey and he wasn't either. Truth be told it all became a bit of a blur, as Only Daughter and I were having such a good time. We looked unsteadily round the room until we espied Mr. Bryson nervously packing up his little leather briefcase. "Let's go and talk to whasisname" we both said at once, and did. My most coherent memory of the evening is poor old Bill fleeing resolutely into the Fitzrovia night.

Anyway, here's a new paperback, just out. I go on about post boxes, Bryan Ferry about the Penshaw Monument in Sunderland, Kevin Spacey on canal boating. Just to drop two more names. But all are worth reading, and this new edition of Icons of England has a fabulous new cover illustration by Neil Gower. Amazon are still showing the old cover with a post box (ooh) on it, but I'm sure that will change soon.

Posted by Peter Ashley at 13:20 7 comments: Links to this post