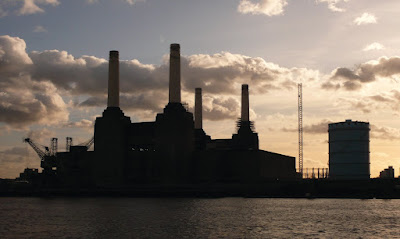 I've always hankered after taking a photograph of Battersea Power Station, but in its neglected and vandalised state this has proved difficult. I just wanted to be able to demonstrate what a stunning building this is, and a silhouette seemed to be the only solution, considering that so much is now missing. And I love those cranes that were used to unload cargoes of coal from the Thames. At last, the opportunity came yesterday lunchtime as I emerged from Chelsea onto the Embankment and was confronted by this. Snap, snap. What I didn't realise was that Battersea is apparently two power stations- one two chimney structure built in the 1930s, another identical one in the 50s, giving it the fantastic four chimney outline. The exterior was designed by Sir Giles Gilbert Scott (phone boxes, Liverpool Cathedral) and is still the largest brick structure in Europe. Going at full bore it got through a million tonnes of coal a year. There's a shot of it in The Beatles' film Help, it's on an album cover for Pink Floyd's Animals (with a barrage balloon pig sailing over it), and perhaps it was appearances like this that started us appreciating hitherto disregarded but important buildings. But since decommissioning in 1983, successive would-be developers have been and gone, after well and truly trashing the building. What a temple to industry this would have made, the art deco turbine hall once again humming with giant dynamos and lit with arcing flashes of electricity to show us just how beautifully exciting these powerhouses were.
Posted by Peter Ashley at 10:32

Lovely, absolutely lovely.
Surely this building could be put back into use?
At about the same time as you were emerging onto the Embankment, I was emerging from Gordon's in Villiers Street and the beauty of BPS was somewhat obscured by concentrating on pouring the other sort of Gordon's on the train back to Brighton.

Thankyou Jon. Aah, Gordon's in Villiers Street. Have disgraced myself underneath their arches many times. It was in there, or down there, that I sealed the deal with David Campbell of Everyman for my English Heritage Pocket Books. Shaking hands over a bottle of something good- I couldn't see the label in the dark. MORE SERCIAL!

I hate using the word 'iconic'.
So I won't.
For the life of me I can not understand how this building has been allowed to get into the state it is.

I wanted to place a Cardboard Reality Intervention, if not on it, nearby.
The closest I could get can be seen here:
http://outaspaceman.blogspot.com/2011/02/cardboard-reality-interventions-2011_04.html

I remember passing by on a train in the late 70's and seeing the S.P.G., dressing in green overalls and Bobby's helmets, practicing riot control charging there.

I can't help feeling It may have made a great venue for the World Sports Gala next year.

Outs SB: I know what you mean about 'iconic'. Another perfectly reasonable word devalued by inppropriate over use. Jonathan Meades discoursed about it quite recently, so of course I've slavishly followed his example in trying to avoid it. Which is a shame.

The nearest I've so far got to taking a photograph of this building is through the window of a train pulling out of Victoria. I managed to bring out the sorry grubbiness of the place - you have reminded us of its majesty.

PS I'm a fan of Gordon's Wine Bar too.

Apart from the films you mention it is the setting for the final battle in the fim version of Richard III staring Ian Mckellan, which also uses the interiors of St Pancras hotel before it was tarted up.

I for one would like to see the control room at BPS which is a fine example of Art Deco, always assuming it still exists.

The story of Battersea power Station since 1983 is enough to make grown men weep. Victim of indecision, developers' greed and a lack of commitment by those involved, it is slowly crumbling away, despite its listed status.

I was fortunate enough to be tipped off about the conducted tours that were organised shortly before the decommissioning. What an amazing experience! The sheer scale of the place was breathtaking. The two control rooms (you are right, it was built in two stages) were extraordinary; one a riot of Art Deco in marble and veneer and the other in stainless steel, reminiscent of an early science fiction film set. I believe it is all still there, locked away.

There were also glorious sculpted bronze Art Deco entrance doors, designed by the original architect Theo Halliday (I think), and I believe these have been preserved. Just as well in these times of widespread metal theft.

I have a small book entitled 'Landmark of London', published at the time of the decommissioning by the Central Electricity Generating Board. It has some good photographs, and might be worth trying to track down.

I used to live just over the river from here and it never failed to delight me as I walked along the embankment in the early hours of the morning, singing Italian arias at the top of my voice. Astonishingly, I was never arrested.

And add me to the list of Gordon's Wine Bar fans.

They do beakers of Sercial in Gordon's.

"What a temple to industry this would have made, the art deco turbine hall once again humming with giant dynamos and lit with arcing flashes of electricity". Sad sigh.

It is difficult enough preserving and re-using intrinsically beautiful and refined old buildings eg a gothic church. A lumping heap of industrial power has an uphill job in being saved. Apart from the architecture, which people don't like, not very many people value industrial history.

Next week I am published a post about saving some important industrial architecture, and its history, in Australia. What an uphill battle that has been.

Have a great holiday season :)

The pig was back at the building last September. I happened to be staying close by and grabbed a snap which is here

ggggggggggrrrrrrr I have received 43 bullshit, anonymous comments (see example below) on your post on Battersea in the last 4 weeks - all advertising hair restoration surgery or other nonsense. Of course I could stop receiving your emails, but I still think Battersea is important.

eg "I'm really impressed with your writing skills and also with the layout on your weblog. Is this a paid theme or did you customize it yourself? Either way keep up the excellent quality writing, it's rare to see a great blog like this one these days.