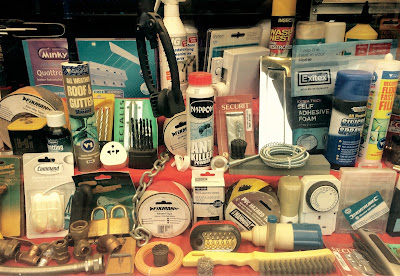 I've been down on the Romney Marsh in Kent, (what again? Ed.) and we stayed in a hotel in Hythe that was so dreadful I can't even type the name, and anyway I wouldn't want any of my Unmitigated Readers to find themselves within a hundred yards of it. The thing is we were warned it might be bad but had an appalling compulsion to see if it was all really true.
Hythe has a very special place in my heart because I had two childhood holidays here. The first time we arrived by train from Charing Cross at Sandling station and thence by a cream Bedford OB coach that squeaked down tree-shadowed lanes to the town. The second was on a maroon and cream East Kent Roadcar from Victoria Coach Station, sitting next to a driver wearing the obligatory white cotton top to his peaked cap. Apart from waiting impatiently to visit a Dinky Toy shop on the following Monday morning, my two abiding memories are of the crypt at St.Leonard's church full of skulls and the almost overpowering scent of brewing floating down the High Street from the west. I now know it was Mackeson, and the old offices are still there, but the brewing now typically done far way on an industrial estate by somebody enticingly called InBev. 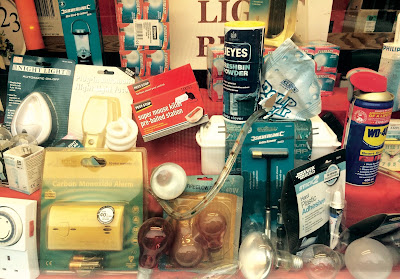 So why these shop windows full of household ironmongery and cleaning products? Well, most of the time we were traversing the Marsh either by motor car or the wonderful Romney, Hythe & Dymchurch Railway, only being in Hythe to see if the source of the mysterious seepage in the bathroom had been attended to (it never was) or to drink silently and copiously in one of the pubs we quite liked. On our progress down the High Street I spotted a shop called 'Home and Hobby' with three round-headed windows and these quite randomly curated displays. The thing is, we just don't see this very often at all these days. Retail design now doesn't mean window dressing. "Is that can of WD40 still in the window Miss Jones?". Where once we had impromptu displays stuffed full of very eclectic but essential things we now have strategically thought-out minimalism. One preciously spot-lit item instead of the fun of juxtapositioning a tub of cleaning wipes next to a lightbulb. 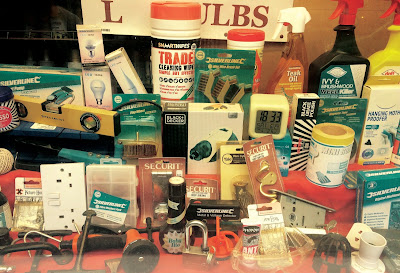 Somehow, I suppose, this was the link I was looking for back to my childhood. Some vestige maybe of how this street looked in 1959 and I impatiently thought about the Dinky Toy I wanted to spend my holiday money on whilst my dad bought his News Chronicle and exchanged shop talk with the manager of Boots. And yes, when there were hotels that didn't keep you awake all night with a noisy and almost certainly greasy kitchen fan and, if there was such a thing as an electric kettle lead, that it was long enough so that when the thing boiled it didn't steam the mirror up and take the varnish off the frame.
Posted by Peter Ashley at 17:46

I bet some of those products are past the sell-by date! Maybe some of them date from your childhood trip.

It's funny you should say that Sue. The shop appears to be still open, but the typography on the packs suggests they were placed there quite some time ago.

I remember a holiday in Hythe with two squabbling teenage daughters. We stayed in a so-called sports hotel on the front. I can't remember the name of it. Maybe your one?
InBev is part of the Anheuser-Busch global conglomerate. Not a good thing in my opinion.
I love old independent shops - I used to own one!
CLICK HERE for Bazza’s fulsome Blog ‘To Discover Ice’

Have you noticed that when objects were being advertised way back when, they were displayed close together and not spread out. There is no black background or blue sky to be seen. Just as many objects as possible!

I am intrigued by these pictures. Not only for the rich array of diverse goods (who could resist the Minky Quattro clothes airer (its name redolent of fast 1980s Audis, or indeed fast female rockers) or a pack of Exitex (which is frankly exciting). Not just the way they're all crammed in there, engaged in some amiable wrestle for prominence. It's also the colours, which all seem oddly muted - perhaps it's just that they've been there for ages and have faded? But that recurring Pelican Book turquoise, plus the highlights of lemon yellow, and whites deteriorating in the direction of beige... the whole thing is a visual poem of the remembrance of shops past.

I just wanted to say how pleased I am that my stalwart Unmitigated Supporters continue to comment so perceptively on my undisciplined wanderings. The day of the blog now seems to be sidelined somewhat by the immediacy of social media, but with you all it's how it's always been- as if we're sitting around a metaphorical kitchen table (whitened deal with drawers full of oddments, obviously).

Philip, you have provided a typically brilliant analysis from these images that were so quickly snapped on the way to the pub, but a very sincere thank you to you all.

Nice post. Really enjoyed it. Mackeson, though. You've stirred a few memories there. It was my first experience of an alcoholic drink, and may have happened as far back as Christmas, 1966, when I was twelve. Looks good, tastes good, and by golly it does you good. Didn't Bernard Miles advertise it?

Bernard Miles did indeed advertise it, and you can see at least one commercial on YouTube.

It is such a strange world we live in when we can talk of old fashioned blogs in the same breath as old fashioned Shop (not Microsoft) Windows.

Nearly played cricket in Hythe once: putting on my pads when the warming-fielders, throwing the ball to each other, hit me in the eye with the ball. Off I went to A & E although it wouldn't have been called that in those days: I was married in 1959 ...so this was before that.

Great post, Peter, many thanks; keep'em coming, as they say.

Wonderful. It's amazing that there are still some shops like this surviving. We went to Melbourne in Derbyshire at Easter and there, in the town centre, is what is probably best described as a hardware store. I got the feeling that it was nearing the end but its window display was eclectic to say the least. It included a full range of beer, wine and sherry glasses, all neatly labelled, of the type you used to get in pubs but no longer do including the Paris Goblet:always fascinated me, that name.

I must go Melbourne Alan. And Ashbourne. Very much the last breath for these traditional shops. A good book on them is Bill Evans & Andrew Lawson's 'A Nation of Shopkeepers', but much of what Lawson photographed will now have gone I fear.

Thanks Peter, I'll look out for that book. I think you would find Melbourne interesting.

Another gem! You've captured what are probably the dying gasps of this type of shop, sad to say. Talking of dying gasps, did you know that the Henry Ford Museum in Dearborn has, allegedly, Thomas Edison's dying breath sealed up in a jam jar...don't ask!

They do say that on Mackeson brewery tours it was arranged with a local dairy farmer that he should drive his herd of cattle through the brewery yard to reinforce the ''Milk Stout' bit...the milk churn on the label being the graphic device by which the message was delivered.

I just love that Mackeson cow story Jon! Thank you.

I commend the photographic journalism book 'Shutting Up Shop' by John Londei to all those celebrating and mourning the traditional shop and its displays.

John: I think I saw one running quickly and awkwardly out of sight behind Snargate church.

Gawain: 'Shutting Up Shop' is indeed an amazing, but ultimately sad, book.

Thank you very much for sharing information that will be much helpful for making coursework my effective.