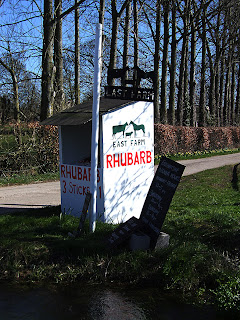 Until my Dorset pals told me, I didn't realise what a big thing rhubarb was in these parts. This little hut (three sticks for a pound) was just outside Winterbourne Whitechurch, between Dorchester and Blandford Forum. I particularly like the stencilled farm animals on the side and, just discernible against the early spring branches, a cut-out metal sign for the farm. I haven't had rhubarb for a long time, but I notice that my neighbour's patch has self-seeded itself through the fence into my garden. So I think I'll get stocked-up with custard and see what happens. I told my two small boys that if they put their ears very closely to the rhubarb they would hear the sticks going 'People, people, people'. They looked at me in utter astonishment and carried on fighting with two runner bean sticks.
Posted by Peter Ashley at 15:29

I wonder if they 'force' their rhubarb using an upturned bucket with a rusty hole in the bottom? I do hope so.