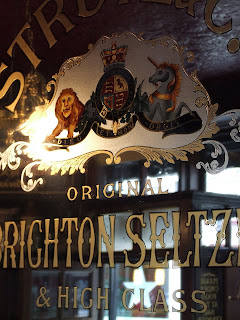 Genuine pub mirrors are getting rarer. They were always vulnerable to someone putting a pint glass or somebody's head through them, and I don't doubt that in the excesses of so-called pub restoration in the 60s and 70s a good many were chucked into skips. We then had to endure reproduction mirrors that were, in effect, just silk-screened glass. None went as far as to reproduce the cut-glass ornamention that added so much in flashing facets of light. So I was very pleased to come across the mirrors still extant in the Dog and Duck in Bateman Street, Soho. After a hard early summer's morning photographing the Household Cavalry in Hyde Park, (a commission, not an obsession), I found myself almost alone in this tiny pub with my hand clasped round a pint of Harveys Sussex Bitter. The mirrors along the wall opposite the bar are amongst the best I've ever seen, and when I asked the chap behind the bar if he minded me photographing them he looked up from his Sun and stared at the mirrors as if he'd only just noticed they were there.
Posted by Peter Ashley at 10:55

If you wish for to take a great deal from this article then you have to apply these strategies to your won web site.

Hi i am kavin, its my first time to commenting anywhere, when i read this piece of writing i thought
i could also create comment due to this brilliant article.


Feel free to surf to my site :: Gucci Ufficiale

I think this is among the most vital information for me. And i'm glad reading your article. But wanna remark on few general things, The site style is wonderful, the articles is really great : D. Good job, cheers

Feel free to surf to my website: Read This

Stop by my web blog ... slc-wireless.com

Hello, i think that i saw you visited my weblog
thus i came to “return the favor”.I am trying to find things to enhance
my site!I suppose its ok to use some of your ideas!

Hey there! I just wish to give you a big thumbs up for the excellent information you've got right here on this post. I'll be returning to your
website for more soon.

Look at my webpage - Abercrombie France

Oh my goodness! Incredible article dude! Thank you so much, However I am having issues with your RSS.
I don't know why I can't subscribe to it. Is there anybody having the same RSS problems?
Anybody who knows the answer can you kindly respond? Thanks!
!

Heya i am for the first time here. I came across this board and I find It really useful & it helped me out
a lot. I hope to give something back and help others like you helped me.

What i don't realize is if truth be told how you're not actually
much more neatly-favored than you may be right now.
You're so intelligent. You understand thus significantly in relation to this matter, produced me in my view believe it from numerous varied angles. Its like women and men aren't interested until it is
something to accomplish with Girl gaga! Your personal stuffs nice.

All the time take care of it up!

I do not even know how I ended up here, but I thought this post was great.
I don't know who you are but certainly you're going
to a famous blogger if you aren't already ;) Cheers!

This blog was... how do I say it? Relevant!! Finally I have found something
that helped me. Cheers!

I'm really impressed along with your writing abilities as well as with the layout to your weblog. Is that this a paid topic or did you modify it your self? Either way keep up the excellent high quality writing, it's uncommon to peer a great weblog like this one nowadays.
.

What's up to every one, the contents existing at this website are truly awesome for people knowledge, well, keep up the nice work fellows.

Genuinely no matter if someone doesn't understand then its up to other people that they will help, so here it occurs.

Magnificent items from you, man. I have keep in mind your stuff prior to and you are
just too wonderful. I actually like what you have bought right here, certainly like what you are stating and
the way in which wherein you are saying it. You are making it enjoyable and you still care for to stay it wise.
I can't wait to learn much more from you. That is really a terrific site.

Ahaa, its fastidious discussion about this post here at this
webpage, I have read all that, so now me also commenting here.

Thanks for your marvelous posting! I quite enjoyed reading it, you could be a great author.

I will remember to bookmark your blog and definitely will come back later in
life. I want to encourage you to definitely continue your great work, have
a nice day!