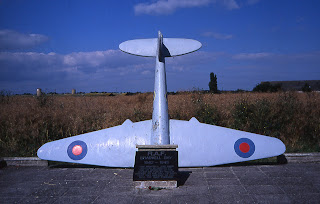 It's that time of the year again when autumn winds presage the dusting down of dark overcoats and the button-holing of red paper poppies. Three years ago I wrote and photographed a little book on war memorials called Lest We Forget, and whilst putting a few pages front and back cataloguing a random selection from thousands of stone crosses, I was mostly concerned with discovering the more unusual memorials. I certainly found a perfect candidate out on the flatlands of the Dengie Peninsular in Essex. This aeroplane marks the passing of those serving at RAF Bradwell Bay where Spitfires and Hurricanes fought on the front line of aerial defence in the Second World War. This, however, is a depiction of a Mosquito, painted in the colours of an RAF Northern Europe day fighter. I find the image of what looks like a plane embedded nose-down in the earth slightly disturbing, but in its own way it perhaps reflects the outstretched arms of a more conventional cross.
Posted by Peter Ashley at 16:24

Peter. A stunning pic, as ever. Thanks for your hospitality at Quinn's Bookshop last night. A splendid do. What other author could claim to have his thank you speech drowned out by the clatter of the till racking up sales of his books? Your personal greeting in my signed copy of More Unmitigated England is most touching. Thanks. Toby.

Yes yes - all very well - I also attended said book signing, remembering to take my copy of Lawrence of Arabia in the hope of getting Anthony's autograph.

By the way the last time I heard such a frantic credit card machine was in Dr Stein's Seafood restaurant in Padstow 1996, in response to my complaint about the constant "chirp chirp" playing havoc with my digestion, it was suggested I might like to pay in cash.