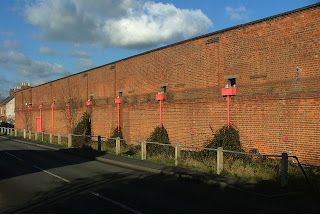 I suppose because I've known this wall (in Fleckney, Leicestershire) virtually all my life, I've tended to take it for granted. But looked at objectively, as I did the other day, it is rather odd. I know that there's a factory behind it (I'm not really sure what they make) and the pink rainwater heads and pipes correspond to the gutters that run between gabled roofs in traditional style behind the wall. Why did someone want to disguise the factory? Is this wall any better? What were they doing behind it? This being west Leicestershire it could be hosiery- Wolsey made socks in the village for Scott's Antarctic Expeditions or perhaps it's something to do with Furnival's of Fleckney Mineral Waters. Is it something so secret it only gets talked about in hushed tones? Maybe I should have found out properly before writing all this, but it's the wall that really worries me.
Posted by Peter Ashley at 16:37

Peter, my dear old thing. I think you'll find that the wall belongs to my pal Rik Costelo who runs Emplas, behind the wall, so to speak. Sorry to shatter any dreams, but they make plastic hose pipes.

Just looked at your new pal, Diego's blog. It's all in foriegn!

So you thought they were making hosiery and they turn out to be making...hose. This is getting like the Two Ronnies ('Four candles; andles for forks').

Actually Richard and Garth Costello are a bit further inside behing an engineering firm which is next to Linic plastics, but, these are all small modern businesses that moved in in the 1980's. The building was originally owned by the giant Thorn Lighting, and yes, during the Second World War there were unmarked vehicles entering and leaving the to and from the Smelting Works, now Forge Close in the centre of the village....