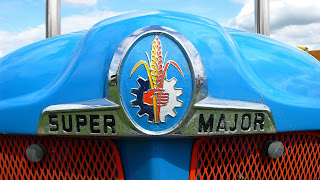 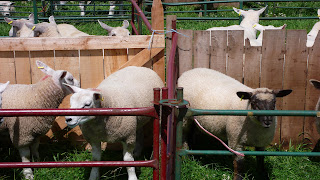 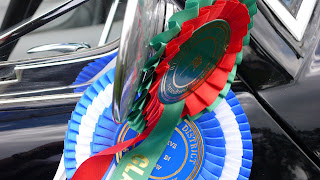 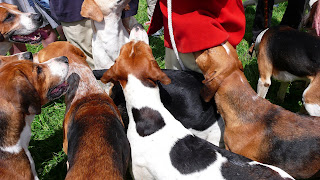 Named after one village, but taking place in the field of another, our local show got under way yesterday. Ringed by ash and oak, the only buildings in view are an ironstone manor house and our church spire, everything else is a green quilt of Leicestershire pastureland under scudding clouds in a summer sky. For the last couple of weeks there's been sporadic activity in the field- a big marquee in pole position, sheep pens huddled in one corner, a show ring marked out in blue rope. And so now the scent of crushed grass, the heady smell of tractor oil and burger, the crackling of triple-horned loudspeakers. Smart gigs and dog carts swish round the ring as the battleship grey Fergusons, dark green Field Marshalls and startlingly blue Fordsons are revved up. Pocket money is distributed to the boys, the youngest immediately taking it upon himself to post his into the utterly inaccessible recesses of a brass tube on a fire tender.

Here is Unmitigated Local England, local people enjoying local pleasures- sheep tweeked and preened for the sheepwalk (one judging category reads: Three Threaves Mule or Masham), foxhounds snuffling for the biscuits in a huntsman's coat. A dachshund dressed-up as a bee looks nervously up at a policeman Alsatian, a polished Bentley convertible displays rosettes on the wing mirror and gingham-topped homemade jams jostle for sale next door to boxes of unmade jigsaws. And of course there's the refreshment tent, the beer not quite as local as we'd like, but it's here that we nod to neighbours in the beer queue, everyone bathed in that wonderfully diffused light that only white canvas under sunshine gives. Dogs are patted, gossip exchanged, gobstoppers and candy floss facepaint the boys. And on top of it all I manage to buy a first edition of Richard Mabey's Food for Free. So I'm very pleased with myself, but it does mean that it's dandelion leaves on toast for tea.
Posted by Peter Ashley at 09:45

It is marvelous that these little pockets of civilisation still exist. There's a few about. They fired up three of the steam beam engines at the Sewage Pumping Station yesterday as well. A new record, following the fitting a a new boiler.

Marvellous indeed. How I was thrown back to Speech Day at St Custards, the grassy stink of the marquee on the Ist XI cricket pitch, the wind rippling the canvas and my housemaster trying to interfere with me. Anyway, make sure that no one at NuLabor sees this piece or they will ban it sure as eggs is eggs. I mean, we can't have people enjoying themselves without having completed Personal Indemnity Forms. Can we?

I think health and safety did interfere, which is why we didn't see the Young Farmers Tug of War. Or it may have happened when I was in the beer tent.

Tremendous! My town, despite having been a centre for farmers and farming since just after Ethelred the Unready, has seen its show descend to an unsteady High Street parade of dodgy floats from offcumdens and the ghastly "carnival" run by the mafia and a Frank Warren wannabee (to judge by the number of fights). Traditions are kept alive by a privately run Game Show, where friends and I once ran Knurr and Spell, Cow Clap Skelling,and cooked the Largest Yorkshire Pudding in the World.

This has to be Unmitigated Blogging at its very best. Might just as well have been there. Can smell the grass, and the TVO fumes, and the beer tent too. How very, very wonderful.

Let it always be there.

To your final sentence I can only add 'Mabey'.

A wonderful seasonal post reeking of diesel, grass-under-canvas, horse shit and warm beer. Long may these shows thrive and yours is by far the best picture since the one in John Gorham's book of blessed memory. My chum has just won first prize at his local Essex village show simply because the judges liked the name of his WW2 American truck - The Marmon-Harrington. "Since my cycling proficiency certificate it's the only award I've ever been given" he sobbed. The abiding memory of that day however was of an ample couple happily departing at a steady 8 mph on his n' hers matching David Brown aircraft tugs.

Come to think of it, I could do with a good tug. Will I find one at one of these Fayres?

Theres always one isnt there

Ho ho Fred, hers looked as if it could pull anything...