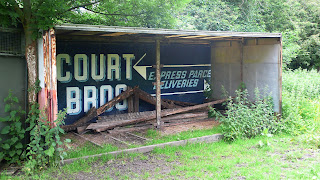 Some time ago I produced a little volume in my English Heritage Pocket Books series called Letters from England. Now stacked up in your remainders bookshop, I should think, in it I went on about vitreous enamel signs ending up being used for quite different purposes than those originally intended. "Many were later found doing duty as allotment shed walls, still mumbling their rusty messages amongst the courgettes." One sign I neglected to photograph in situ was discovered in the derelict kitchen of Etchingham station in Surrey, a bright yellow and red sign for an insurance company turned face to the wall as a heat screen for a gas oven. "Ask your Station Master for Details" it still whispered against the pale green plaster, until gently liberated into the Ashley Archive. And of course it isn't just enamel, as seen here in Great Bowden in Leicestershire. Backed up against a railway line a shed uses the side panel of a 60s delivery van as the back wall. The rest of the structure perhaps resonates with what was left of the vehicle. 'Courts' have long gone from the Leicestershire scene, the only reference to the name now being 'Crown', 'County' and 'Magistrates'.
Posted by Peter Ashley at 12:42

I still kick myself for not "liberating" the enamel sign from outside CH.N Katz's shop on Brick Lane before it was turned into a gallery. It was nothing fancy, but peppered with rust and what may have been shrapnel holes. The rust had eaten the edges of the sign so it looked like deckled Tiziano paper. Katz's was one of the very last of the Jewish businesses on the Lane, run by an (apparently) 400 year-old Hasid. He sold nothing but string.

the sense of urgency evoked by the arrow is rather re-assuring - keep it simple, stupid !

The link between old signs and allotments rang a bell. Like Ten-inch Wheeler, I regret not removing an old sign – a tin sign advertising Palethorpe's sausages that was used to cover a well next to an allotment that belonged to a relative of mine. I was a boy at the time, but that's no excuse – what are boys for but to collect (and if necessary nick) evocative stuff? Trouble was, people would have fallen in if I'd stolen the sign. Katz's on Brick Lane was an extraordinary place. It is remembered in Rodinsky's Room by Rachel Lichtenstein and Iain Sinclair, the documenter of Unmitigated England's edgier areas.

Oh the Palethorpes Cambridge Sausages sign. One once shored up a neighbour's chicken run, where I saw a rat pull a hen down a hole in the dusty ground. Much squawking.

Great Bowden ...now that's got quite a regal ring to it ...don't you think

I thought you'd like that name WPB.
And thankyou for more of the same, Diplo, I'm winding up the Cyclemaster now.