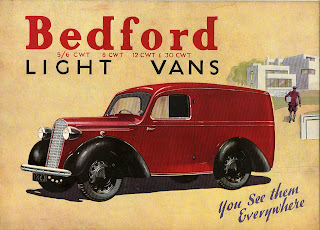 Last night I watched John Schlesinger's 1995 film of Cold Comfort Farm. A thoroughly enjoyable experience, and even if you're a big fan of Stella Gibbons' book I don't think you'll be disappointed in Malcolm Bradbury's adaptation. One of the more obscure high points for me is when Flora Poste persuades Amos Starkadder to buy a Ford van and leave the farm in order to preach his gospel according to The Quivering Brethren. So taken with the idea, he is seen waving the latest Ford van brochure about, a pristine prop if ever I saw one. I got very excited, wincing when Amos appeared to fold it in two to shove it in his pocket, but started to think 'I've got that in the Archive somewhere'. As you will have guessed by now, I haven't. It's for 1938 Bedford Light Vans and I thought I'd just post it anyway. But if any film prop managers need one for an excitable pre-war proto tradesman to flourish on camera, you know where to find it. (No creasing.) For commercial vehicle cognescenti the van pictured is the 5/6 cwt 10hp 4 cylinder version, costing £140 plus £15 tax (in primer). For a 'fine quality cellulose' finish you added another fiver.
Posted by Peter Ashley at 15:42

I had an uncle who had one of these. He was a confectioner, so the van was usually full of chocolates, fudge, and coconut ice. He used it to deliver to shops, though, not to cool modernist houses like the one in the ad.

It's funny what once got carried about in vans. One of my first, shall we say, adolescent experiences, took place in the back of a Bedford potted meat van.

'Potted meat' Peter? You'll have Camilla on here with that one....! Meanwhile, this is a great addition to February's Bedford CA Vans posting! Ghastly thought: then, £140 to buy. Now, £400 just to tax!

Who was it had a very nice van with 'Fish slapping by appointment' boldly sign written upon it? No matter, your Bedford is a charming example although I'm quite partial to the Ford Eight and later, the Morris 'J' type. You're right, alo, where is Camilla when you need her?

Jimmy Edwards had a similar van with "Professor Jimmy Edwards, Purveyor of Family Entertainment" on it.

It wasn't so long ago, well OK, ages ago, that I remember seeing roadside posters for Bedford in France "Le camion le plus vendu en Europe" (or something like that). Poor old Bedford.

A great book....I always remember the line about encountering "something nasty in the woodshed", but can't remember which character...

It was Ada Starkadder, the matriarch hidden upstairs.

Good book Peter, and set right here in God's loony county. What was the business of doing the dishes using the wrong end of the dish mop called?

Adam Lambsbreath did the washing-up with a twig, until given the dish mop by Flora. He called the whole tedious activity "cletterin'".