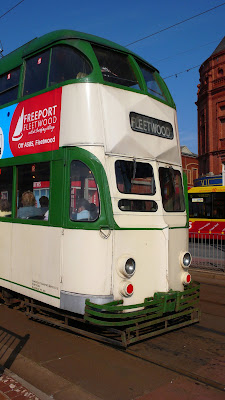 I feel a bit of a transport fest coming on. Trawling through some of last year's photographs I came across this Blackpool tram. I was up there to photograph the Tower for what will be Built for Britain, due to be published in June, and whilst tucking into a large cod 'n' chips in Harry Ramsden's I kept noticing the trams humming by on the promenade. Many of them were in unspeakable liveries, as you might imagine, but every now and then a good old original careened up to tram stop. I think the only thing I knew about the trams was that a character in Coronation Street was run over by one, so I positioned myself carefully to get this shot of what I hope is a 1934 Balloon Car in its original colours. The rails extend from Starr Gate in Blackpool to the ferry terminal at Fleetwood, mostly running up the Fylde coast, and on its opening in September 1885 was the first practical electric tramway in the world. Most double deck trams are now only to be seen in places like the wonderful National Tramway Museum in Crich, but non-heritage examples still only run here in Blackpool, Hong Kong and Alexandria in Egypt. I only wish I'd had time to run up to Fleetwood on this one, perhaps sitting at the front with a melting ice lolly, looking out for death-defying leaps by dodgy soap stars.
Posted by Peter Ashley at 18:13

Trams evoke misty-eyed responses in people of a certain age. I can just remember being taken for a tram ride in London by my father - a dim memory rekindled when riding the Hong Kong system. I've also ridden them in Melbourne and Koeln, but modern trams (like the ones in Sheffield) are hideously ugly and ruinous to the visual environment - even worse than bendy-buses!

Munich's just got rid of their 'hard seat' articulated trams, which were all clanging bells and white-knuckle cornering. On my way home after a night on the dunkel I used to pretend I was in a post-war spy thriller. Now it can be told.

Ooh Ten Inch. Are you a Len Deighton fan? All those tales of Berlin barbed wire, brown coal power stations and beaten-up Audis waiting by freezing checkpoints with Smith & Wessons taped behind sun visors. Sorry. Carried away there a bit. It's just that I'm reading his Game, Set & Match trilogy again.