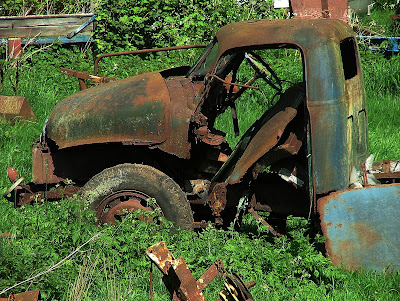 After photographing a pair of rusty cast iron gravestones in a Northamptonshire churchyard, I poked my nose over the wall and was confronted by this. Scrapyards are usually very oily places with precariously stacked-up vehicles- Morris Marinas at the bottom, Lancia Deltas at the top- and boiler-suited men trying to restrain slavering Alsatians. But here is the scrapyard that even time forgot, the bucolic answer to North Circular razor wire and covert car crushing. Commentator Diplomat confirms that this is a Bedford A3, c1955. Even without its nearside wing the shape is so seductive, so reminiscent of its American GM counterparts. You won't see many around now, but diecast afficianados will perhaps remember its cab and chassis put to use as a Pallet-Jekta Van (No.930), with the Dinky Toys logo on the side and a winding handle that chucked pallets out the back. And something else I've just learnt. How many of us thought that these trucks were given the name Bedford because they were made in Bedfordshire? Not so apparently. It comes from Bedford Motors in London, who first imported Buicks in 1910. Now I wait for someone to tell me that Luton vans were made in Tamworth.
Posted by Peter Ashley at 14:50

I suppose it's too late for an Ashley tome on the hidden scrapyards of England? Doubtless all current legislation will have swept them away. Places like Percy Voakes' yard at Adversane, West Sussex and Brooks in Edenbridge, Kent were a treasure trove of ancient vehicles. The thrill of discovering some forgotten car amongst the brambles away at the outer reaches of the yard still gives me goosebumps. Sad ain't it?

For years, my mum and dad's old Bedford Dormobile Romany campervan swayed gently on top of a pile of crushed cars in a West Yorkshire scrapyard. We always used to look out for it if we passed in our custard-yellow Toyota.

Can anyone identify this that I found on a hilltop in Kefalonia?

It's a web address. Was it written on paper or engraved in a rock?

Cor, that's good 'un Ten Inch. Post war (around 1947?) American. Er, that's it as far as I can see without the radiator grille. And Affer- behave.

The poetry of rust. Marvellous. I'm told our local scrapyard now has every part logged on computer and most of them on shelves. Makes for a different experience from the car-piles of old, but I suppose it's easier to find stuff.

You're right Philip, it's another, more ordered world now. But another thing I like about old rusting vehicles are the steering wheels, the plastic or Bakelite cracking and dropping off to leave just a thin rim of rusty metal.

When I were a young lad I used to spend some of my summer holiday with my Uncle Hector on his farm in north Cornwall, near Launceston. The Ford dealer for the area was called Sprys and they had a large shed near the farm where they kept their very old, unsellable (then) stock. It was so overgrown I think old man Spry must have forgotten about it. I used to be able to sneak in through an open window and sit behind the wheel of Ford Pops and old vans and make brmm brmm noises whilst trying to turn the stick-thin (Bakelite) steering wheels. Wonder if it's still there? Probably a crack den now.

Lovely Ron. I think it's still there, waiting for you to return, swishing aside the tall nettles with your freshly-cut hazel twig, the sunlight just catching the.....

Where was this taken please? - I've a decay and dilapitation photo contest to enter and I'd like to use this as the subject