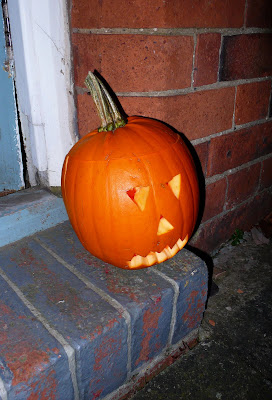 Concerned about some American cultural imports, the trick 'n' treating aspect of Halloween has never really appealed. All those old ladies keeling over at the sight of the undead beckoning to them with bony fingers, and those rubber masks- not too keen on masks either. So it was with dismay that I saw The Boys arrive yesterday in black velvet cloaks. "Take those masks off boys" I said, "You know I don't like them." "We haven't got them on yet Dad". Ghoulish laughter all round. Youngest Son had his cloak on all day, staring out of the kitchen window waiting for dark. Older Boy started on a Convincing Argument, and said if anyone wanted a trick he'd do one with his playing cards. He practised well, and Mr.Curmudgeon let them go round the village after he'd nearly ended-up in casualty making the pumpkin heads. I said why don't they go and hide in the churchyard and then I'd not come and find them. But what a good time they had. The village must be used to it, they came back with a big bag full of goodies and had been made very welcome in houses, along with other children who continually knocked on my door until I ran out of the pennies I'd heated up on the stove. No sign of any conversion to Satanism, we sat down by candlelight to a fabulous pumpkin soup. I said "What was the best bit?", and they replied that one house was in complete darkness and a loud voice had shouted out gutterally "What do you want?" and then the door had been flung open by a neighbour dressed as the Grim Reaper. I like that, it's given me an idea for next year...
Posted by Peter Ashley at 11:17

Labels: Scythes, Skeletons, Tombstones, White Sheets With Holes In Them

One year we placed a toy bat on elastic on top of the porch door and left it slightly ajar. There was more than one young child that ran back up to their waiting parent. If they want a treat then it is up to us to supply the trick.

Thankyou Smallawei. Looks like you had a good Halloween.

I didn't need to be Trickle Treated (as Boy the Younger calls it). I have my mother staying with me - how much horror do you want?

I had one visitation;but we're talking Peckham here. I told them I was fresh out of crystal meth,and that the M&M's would have to do instead.Thankfully,they didn't torch the building.

Having just spent my first Halloween in California I have to say it was rather better than I expected. It is more of a harvest festival/fall celebration with something for everybody....plus carving pumkins is much easier than the turnips of my childhood.

I too detest those masks, although when I lived in London I would don a black pointed hat and a comedy warty nose of my own manufacture and cackle at trick-or-treaters, before offering them suitably gruesome confectionery. It seemed to work.

I must confess I find this All Hallow's Eve stuff rather difficult and usually arrange to be out. When such things were believed in it was a serious business, with the appallingly evil Queen of Faeries riding out to collect souls for Hell.

When I was a boy, however, it was largely ignored; the more entrepreneurial of my contemporaries indulged in the 'Penny for the Guy' routine instead.

I'm glad your boys enjoyed visiting the house with the Grim Reaper - it was ours and we enjoyed the evening too. This village has entered into the spirit of the thing for years.