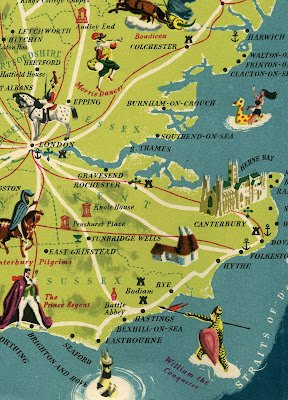 I rediscovered this detail from a map in the archive, and can't remember where it came from. Except it must have been from a 50s holiday brochure for someone like British Railways. I've always loved picture maps of England; their simplicity and naivety have a particular resonance in reducing the country to the barest essentials. This one of the south east keeps it very basic: An immense Canterbury Cathedral and a pair of oast houses cipher Kent, in Brighton the Prince Regent spies a Norman conqueror splashing into the English Channel and Chaucer resolutely approaches Penshurst wondering if it wouldn't be quicker by rail on the Pilgrim Express. And Morris Dancing seems to be the only thing going on in Essex, although I do worry about the swimsuited girl on her inflatable spotted duck being so far out to sea. Picture maps were (and sometimes still are) seen on posters and postcards, and Esso once did a whole, much more detailed, set of maps in a bound book. Which is also around here somewhere. Perhaps there should be one for Unmitigated England that's just our sort of pubs indicated on rusty signposts being looked at from Austin Somersets.
Posted by Peter Ashley at 08:02

That's lovely - and really interesting. British Railways did a series of pictorial maps showing counties (or groups of counties) - if you search online at the moment you can find Yorkshire, Devon, and a combined map of Essex, Suffolk, and Hertfordshire. But these county maps look more detailed than the one you've posted, which does, even so, look like a railway map.

I shall look for them now, thankyou Philip.

Sorry they were supposed to be links !

Daniel: Thankyou for those fascinating pointers. I really must try and find that Esso book.

I love it when all the important events and locations of 1000 years or more have to be depicted on one map :) Can you imagine the committee's decision-making:

"I want The Tower of London on there".
"God no, that has awful associations. Alright, you can have the Tower if I get a Victorian pub".
"Are you insane? People will think we are drinkers".
"We need more gothic churches, more gravitas".

I agree Hels. And I love the rendering down of big historical events to a single figure. Or two if you're lucky.

And the rendering down really does leave you wondering whether the secret weapon of the Norman conquest was a fleet of swimsuited Dutch girls arriving simultaneously with William & Co. on inflatable ducks?

And the rendering down really does leave you wondering whether the secret weapon of the Norman conquest was a fleet of swimsuited Dutch girls arriving simultaneously with William & Co. on inflatable ducks?

I assume Chaucer just got off the EasyJet flight at Gatwick. What a super illustration though...be nice to see the set.

Yesterday I stumbled on an exhibition that will be of interest to all inhabitants of Unmitigated England, of the work of Abram Games, designer, of course, of the Festival of Britain logo and much more. It's at the Minories, Colchester, and it really is unmissable. But it runs for only another three weeks, so get your skates on. (I'm sure Games would have come up with a fabulous visual pun to match that expression.)
http://www.colchesterchronicle.co.uk/2012/01/20/minories-maximum-meaning

David: Thanks for the tip, I do have to be near Colchester soon. Just hope it's in the next three weeks.

David
bugger... I can't get there on time. But the posters are beautifully reproduced on the Colchester Chronicle page. So many thanks.

There was a very good example of this type of map in the 'Museum of 1951' at the Royal Festival Hall. Sadly, the exhibition is now closed but can you read about it here: http://loveletterfromlondon.blogspot.com/2011/08/royal-festival-hall-and-museum-of-51.html

The map is not mentioned in the above post, but it does feature the patchwork of British history - one square for every year from 1851 to 1951. Fascinating in itself.

Here's what I remember of the map. Aside from several areas being distilled into one icon - hop houses for Kent, for example - the map also voiced local concerns about fishing and industry, football rivalries or just a snatch of local dialect. Worth seeking out, but I can't seem to find any trace on the web.

Thankyou for that Sir Button. I shall start mooching about in the archive.

I shudder to think what illustration they might have used for The Forest of Dean.

Sir Button, the map was called 'What do they talk about?'. I included it in this blogpost, complete with a not-very-good photo of the map. Some of the suggestions are a little odd, for example 'nylon' in south-east Wales.

It's an awesome piece of writing designed for all the web viewers; they will take benefit from it I am sure.

It's going to be ending of mine day, however before ending I am reading this wonderful piece of writing to improve my know-how.

Another late comment from me but I just wanted to memtion the posters that were produced during the 1950s (presumably for schools) by either National Savings or the GPO, not sure which. There was a tiny office near the main PO in my home town where you could pick these up free. I clearly remember a beautiful 4-colour map of Britain crammed with illustrations of local customs such as the Dunmow Flitch and Padstow Hobbyhorse. It was on my bedroom wall for ages, wish I'd kept it. I remember another showing the birds of Britain but I didn't find that so fascinating.