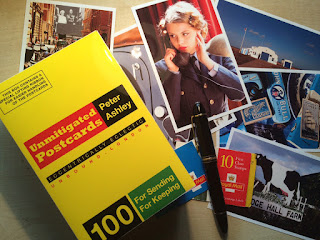 Anybody who has been within five miles of me in the last year will have heard of the progress of this latest addition to the Unmitigated Stable. It’s taken a while to fine tune, which involved immense research and drinking in London, Leicestershire and Oxfordshire. (In fact it involved drinking just about everywhere really.) So at last, thanks to those marvellous people at Unbound, here is an opportunity to go even deeper into the hidden recesses of Unmitigated England.
The Unmitigated Postcards Box is my first go at a crowd-funded project. Which basically means that subscribers elect to support an author, usually for a book, at different levels from signed collectors’ editions right up to something really special at the top end. It’s all so exciting. You’ll see from the Unbound site that the yellow carton (a pastiche of a well-loved Kodak photo paper box) contains 100 ‘eccentrically eccentric’ postcards. A few you may have seen; most you won’t. All are my favourites, and it would be brilliant if you thought that you could support the cause. Thank you all very much.

So happy to be given a privilege to post a comment here. You have a wonderful site. Thank you for the effort to publish this.