We've Been to Norfolk 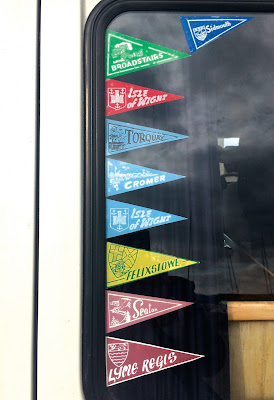 Put 'holiday car pennants' into Google and you'll get a lot of flag waving from folks offering car hire at £4 a day. All but forgotten, we were very pleased to find these on a tiny motor home pulled up in the wind on Brancaster Staithe in Norfolk. Falling into conversation with the owner we found out that they had been steamed off the windows of his first car, a Humber Sceptre. An odd status symbol from the 60s, I think they were regarded a little sniffily by my family, like my dad's reaction to post-war majors retaining their title in peacetime and my mother changing her accent to relatively posh in the butchers.
But here they were, all from the confines of England and so redolent of an artist sucking his pen to find a relevant subject to illustrate, and then once again looking-up the coat-of-arms. Still, it was somehow reassuring to see them, a reminder of the pride taken in motor car travel and of the other customising that went on like James Bond bullet holes on your windscreen and a tiger's tail hanging out of the petrol tank.
Posted by Peter Ashley at 11:43

But these pennants. Yes, they were perhaps a little infra dig, although at the same time I look back on them fondly, as to a time when people were proud to have holidayed in Britain, rather than apologising for it by using a ridiculous term like 'staycation'.

Indeed, but I've just been reminded it was a Humber Sceptre. Even more unusual.

You're right! my dad had no time for forces ranks being carried through to peacetime...neither did he subscribe to 'elocution lessons' with which my mum would periodically threaten me when my diction became too 'Essex'. He reserved a particular distaste for the pennant habit - "why do they want to tell us where they've been?" quoth he, "I suppose it's a miracle they got anywhere in that thing" (points at clapped out pre-war Standard or trusty side valve Norton motorbike and sidecar.

Along with the Tiger tails et al, we always laughed at those preposterous ungainly cars converted to carry caravan bodywork which proudly bore the sticker proclaiming the legend 'I'm converted to a Danbury'...after the company that perpetrated such horrors.

Memories, Peter, memories...and all sparked by those pennants!

Thankyou Jon. And thank you for taking the time to comment at such length. Marvellous stuff.

Lovely! Recalls the days of all those badges my mum (and then I) sewed on to my anorak ...

By the way, in 1930s Germany, you could buy little metal badges that the seller would nail to your stick, to show where you had been, as related by P atrick Leigh Fermor in A Time of Gifts. He had a load of these things (called Stocknagel, stick nail) on his ashplant, until the thing was stolen, along with his rucksack, in the Jugendherberge in Munich.

Ah yes, Thankyou Philip. I seem to recall that.

Certainly rare survivors but all this talk of retired Majors and car pennants for Torquay; why am I thinking Fawlty Towers?

You didn't mention the fingertips that you could stick to the edge of the boot lid and does anyone have one of those devices that was meant to protect your car from a lightning strike. Of course you go back further in time there was Goss china suitably emblazoned with the coat of arms of resort towns.

Thank you very much for sharing information that will be much helpful for making coursework my effective.

Don't get us going on useless car accessories...Fly deflectors in green perspex, the anti-static strip, chrome and orange reflectors for the wings and 'Peco exhaust tuning tailpipes'...bugger I've got sucked in!

Peter. How wonderful. Redolent of the 60s, indeed. And such beautiful typographical designs.

They put me in mind of Luggage Labels that one used to proudly display on ones very large trunk. Such as: P & O to Sydney; Frankfurt; Paris, etc, etc.

And, while you're mentioning Norfolk, I've just had Cromer Crab for tea !!!

Philip Wilkinson said: "By the way, in 1930s Germany . . . He had a load of these things (called Stocknagel, stick nail) on his ashplant, until the thing was stolen, along with his rucksack, in the Jugendherberge in Munich."

Hello Everybody,
My name is Mrs Sharon Sim. I live in Singapore and i am a happy woman today? and i told my self that any lender that rescue my family from our poor situation, i will refer any person that is looking for loan to him, he gave me happiness to me and my family, i was in need of a loan of $250,000.00 to start my life all over as i am a single mother with 3 kids I met this honest and GOD fearing man loan lender that help me with a loan of $250,000.00 SG. Dollar, he is a GOD fearing man, if you are in need of loan and you will pay back the loan please contact him tell him that is Mrs Sharon, that refer you to him. contact Dr Purva Pius, call/whats-App Contact Number +918929509036 via email:(urgentloan22@gmail.com) Thank you.