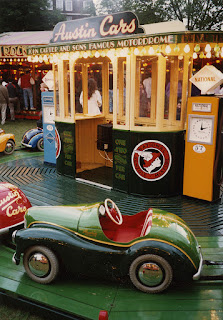 Carter's run a traditional funfair. I first came across them in Chiswick one rainy Sunday evening, and was immediately transfixed by the Austin Cars Motordrome. If I'd been two feet high (or even four years old) I'd have spent all my money just going round and round it all night. The whole construction was superb, right down to the lettering, petrol pumps and National Benzole roundel. The cars, of course, are the thing. Starting life in 1948 as Austin J40 pedal cars, they were made from off-cuts unwanted on their full-size counterparts the Austin Devon and Dorset. Originally finished in the same paintwork as their big brothers, they were made in a purpose-built factory at Bargoed in South Wales by disabled Welsh miners. It closed in 1999.
Posted by Peter Ashley at 09:38

I saw this ride when Carter's visited Victoria park. Side by side plastic of the newer rides it was marvelous to see the craftsmanship in this ride.