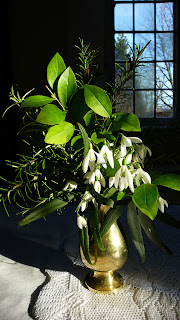 Yesterday was like early summer rather than a week or so into February. I took my boys out into the surrounding countryside (much mud-slinging and fighting with lengths of discarded wood) but then thought I'd quieten them down a bit with some church crawling. First stop was Horninghold, a tiny village of two streets with some of the most though-provoking houses in Leicestershire. Peeping from behind laurels and yews, it is an enclave of differing architectural styles built between the late nineteenth and early twentieth century for prosperous owners. The church of St. Peter presides over them all on a slight eminence, with an unrestored thirteenth century interior. Spotlighted by the sun on the altar table was this arrangement of snowdrops, those hopeful little flowers that were spreading amongst the headstones outside. I was about to tell the chaps to come and look at it in order to give a little gentle lecture about the perpetual progression of the seasons, when I heard excited yells from a corner vestry that was shielded from the rest of the church by two six foot high wood-panelled walls. I turned to see two brooms being waved about in the hitherto undisturbed air, locked in mortal combat. Hopefulness of a different kind, I suppose, that of knowing that whatever happens, life will never be dull.
Posted by Peter Ashley at 13:54