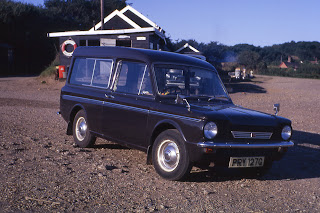 We've all been there. Those moments in our lives when we stop and think "Actually, what have I done to deserve this?". This Hillman Husky (rare estate version of the Imp that has a walk-on part on page 176 of More from Unmitigated England) was my second company car after a trouser-destroying Viva SL. The keys were handed over to me whilst my colleagues turned away and guffawed silently into their cupped hands. The time is 1970-ish, and the setting is Dunwich beach in Suffolk. The other slides in the yellow plastic Kodak box are of the last piece of masonry from the last church to fall into the sea from the clifftops. I'm also pretty certain that this is the only record of the car without big booted dent marks in the door. This must be the only vehicle on earth that filled up with carbon monoxide everytime you stopped at traffic lights, a kind of Hillman Russian Roulette where every journey was spiced-up with the odds of getting home without your eyes glazed over. I include it after the generous response to the Grazing Hunter, and as a warning to the curious. Don't even think of driving one, if indeed you could ever find an example, unless you're deeply depressed or have just finished listening to Alastair Darling's Collected Speeches.
Posted by Peter Ashley at 10:44

Glorious stuff - and I'm off to buy your books - RIGHT NOW. Anyone who had one of these inflicted upon them deserves our support!

Thankyou Alois, always glad to have an Unmitigated Supporter.

Blimey Pete -is that a bit Bedford CA action going on in the background ?

It is indeed. The first vehicle I ever drove was a Bedford CA paint delivery van with my Uncle John in attendance, somewhere near Burton Latimer when I was but a gawky youth of fifteen or so. Somewhere I have an original sales brochure for them that makes them look they're twice the size.

Never mind. Another couple of years and it could have been an Austin Allegro. Allegro con moto, as the musicians say.

My Dad had one of these when he first started out selling Antiques. He had it fitted with a tow bar so he could tow a trailer, similar in size to the car. It was always boiling over and had identical filler caps for oil and water. Confused I filled the sump with water one day. Had a good heater though.

My Dad had one too. Fed up with the lack of performance, and hopeless reliability, we managed to replace the 875cc all-aluminium slant four with a 24 litre broad-arrow 12 cylinder Napier Sea Lion engine from an old torpedo boat we had at the bottom of the garden. Initially we had problems with the colossal torque (the car would rotate on its own axis at anything above tickover), eventually curing the problem by fitting stabilising wheels on a huge girder. This passed through the car behind the driver's seat and was in turn lashed with fencing wire around the 'b' posts. We made use of a trailer too, although in my Dad's this was used for the radiators, with an arrangement of umbilical pipes running through the back window of the Husky. The Sea Lion produced something like 800 lb/ft of torque at 1,700 rpm. More than enough to power the little car to a frankly terrifying 180 mph. Pretty hairy on the 13" rims and remoulds Dad insisted on using 'to save money'. Ah! Happy days.

I do hope Justin won't be offended by my little contribution, but for the sake of accuracy, the units of torque are Foot-Pounds (ft.lbf).

Camilla, you're quite right; I stand corrected. Accuracy is all!