Lunchtime of the Hunter 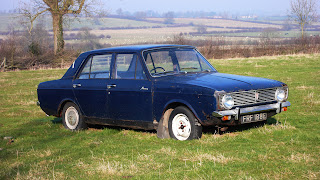 Except it isn't a Hillman Hunter is it, not really? This model is the downbeat version Rootes badged as a Minx, but whatever it is it sits in a field on the edge of my village. Somehow these cars have popped-up into my consciousness at various times of my life; first seen on the front cover of my 1967 Observer's Book of Automobiles with a very curvaceous blonde in a pink polka-dotted frock sitting seductively on the bonnet of which I now see is the Singer Vogue manifestation. Then in 1970 I borrowed one off a work colleague in order to deliver what seemed like six million Goddard's Silver Polish leaflets to Johnsons in Frimley, Surrey. It was the first time I'd managed to coax any car up to 80mph on the M1, not bad considering the boxes of print weighed the back end down to the rear tyres. My father owned a spectacularly dull Hunter in chocolate brown, and then they seemed to disappear, although I believe the tooling was sent from Ryton-on-Dunsmore to Iran to make taxis; much the same story as the Hindustan Morris Cowley in India. I expect this grazing Hunter is the plaything of an under-aged driver, but round here it could just as easily be awaiting conversion into a chicken coop.
Posted by Peter Ashley at 15:45

Now it's all coming out ! Secret auto enthusiast revealed at last. I love this picture - Leicestershire hunting country at its best, these little embelishments delivered by the agricultural community really bring out the full glory. Marvelous - carry on.

Hi Peter
Check this, featuring none other than the Hillman Hunter http://www.youtube.com/watch?v=nkiqGgREk5E

What a treat! All that sincerity, all that deference. I especially like the chrome wires on the Rover 2000TC; and the Viva on the Pop-art revolve. Heady stuff.

There can't be many Hillman Hunters left (outside Tehran anyway). Quite an honour to have one as gate-guardian to Ashleigh Magna. They have achieved another kind of immortality: if asked to draw a car, a five year old will come up with a Hunter's profile every time.

I'm really upset that this may be my last post. I am about to be rushed off to hospital having had a severe coronary infarction: my heart went into spasm due to the uncontrollable laughter I experienced whilst watching Doug's Youtube clip......How DID we fool ourselves? There were some successes in there - Cortina for one - but the IMP? The rather-large company I worked for at the time, acquired one of these to present to a young man for winning the UK Motor Mechanic of the Year contest. It was handed over in Feltham, in the full glare of BBC cameras and press's flashing camera bulbs. It broke down in Southall, a mere 10 miles away, and resisted all attempts by said Mechanic of the Year to mend it......we eventually gave him the money instead, with which (it was rumoured), he bought a second-hand Ford Prefect and had a good holiday with the rest!

Thankyou Doug, that clip is pure gold. Or in car colour swatch terms Autumn Sheen. I'd forgotten that the Hunter was available with two hunting girls and no doors. And the Viva. I started a new job immediately after my honeymoon in 1969, and was given a red Viva SL to drive about in. Day One I took it out, wearing my new Hector Powe wedding suit. When I got out at a client's, a good portion of my trousers were left behind with a sound like tearing a sheet in half. A broken piece of seat spring had decided on that moment to make a bid for freedom.

rootes,hillman...i know a lot of these care were rubbish but they need their little moment in the spotlight...they are important parts of my childhhod and i hope they are remembered.

You're right Thud. It's all too easy for cynical old gits like me to take the mickey, but I too remember these cars with great affection. Given a lift home en famille in a duotone Hillman Minx was a great highlight in my childhood, and giving a Minx a good going over is still an undying, if slightly slower, pleasure.

I have a Blog about Hillman Hunter and its Iranian counterpart Paykan. I have made a post about this Hillman Minx Chicken Coop, please visit: www.PaykanHunter.com