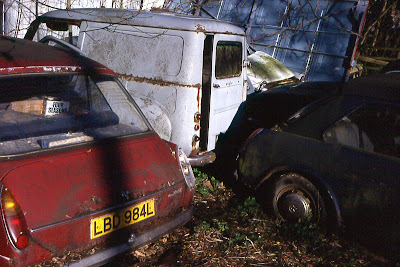 Last week I showed you Bould's now extinct garage in Kings Cliffe, Northamptonshire, and promised that I might show you Bould's yard next door. I'd forgotten that there were two Austin 1300's in there. We don't see many of these about now, probably something to do with the apparently dodgy subframes. But we loved them when they first came out, perfect for those of us aspiring to a larger mini. They shared the same designer in Alec Issigonis, who also brought us the poached egg Morris Minor, and sported hydrolastic suspension on the front wheels that got everybody very excited. Usually known as the 1100, they were available with 1300 and 1500 engine sizes, and in typical BMC fashion were badge-engineered across all their marques, so you could have a Wolseley, an MG, a Riley Kestrel and, if you wanted to be thought posh, you could fork out for the Vanden Plas Princess. Plonked in amongst them in this picture is the Austin A30 van. One of my elder brothers went about in one of these, painted mid-blue with the legend 'Melton Farmers' on the side in yellow, driving up remote Leicestershire farm tracks to off-load artificial insemination plungers and sheep dip. I imagine.
Posted by Peter Ashley at 10:48

Thankyou! I ate up all my greens and you were as good as your word. Picturesque as these rusting wrecks are, and a tad ungratefully, I was rather hoping for something a little older - mouldering Model T Fords or Edwardian Renaults, that sort of thing - maybe the odd Grasshopper Eight poking its nose through the stinging nettles. The fact is you had the foresight and captured the moment and that's what counts...any one of these cars would be snapped up by enthusiasts these days. My own A35 shed most of its undercarriage at the Blue Boar services and was driven straight to the scrapyard after a trip involving Cornwall, Durham, Leeds and Brighton. The best £7.00 I ever spent.

The van is actually a late A35 -- identifiable because it doesn't have a trafficator.

James Hunt had an A35 van, even in his famous years. I had a Vanden Plas 1100 and was never famous.

I got a lift in an A35 a couple of years ago. I couldn't believe how tiny they are, compared to moderns. I nearly bought one for £600 on ebay, drunk, but had a blinding flash of sobriety just before I placed that fateful bid.. A lucky escape, especially as it was in Belfast.