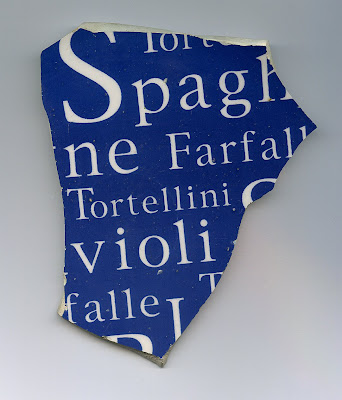 Not far from Melton Mowbray is a tiny hamlet, just off the undulating road that winds through the Leicestershire wolds up to Colsterworth. Just a handful of houses, and a railway crossing keeper's cottage next to a gate that still has to be opened manually. I tipped up there earlier this year, roaming about looking for a decent photographic viewpoint of the church. Outside of the main churchyard was a little enclosed area, probably ear-marked for new resting places. In one corner was a wooden hut, a sexton's lock-up for spades and grave templates perhaps, and behind it was a stack of broken pottery. This piece caught my eye, made by Italian makers La Primula. Don't ask me why I pocketed it, don't ask why it's been sitting on my kitchen window sill next to the geranium pots for six months. Of course there's a story here, but for want of it I've had to make something up. The blue typographic plates were in pride of place on the vicar's wife's kitchen dresser, a souvenir from either Lake Como or a Lakeland cookshop. Their daughter has an Italian girlfriend to stay and the vicar commits an indiscretion with her. The vicar's wife finds out and hurls the innocent crockery after him as he races for sanctuary in the church vestry. Later that night he gathers the pieces up and hides them away. Presumably at the back of the shed because the dustbin's full. Oh I don't know, more likely they're left-overs from a fete where wooden balls were chucked at crockery. Perhaps you have a more convincing solution. Or have I just completely lost it.
Posted by Peter Ashley at 12:09

You have completely lost it. You are way to distracted by vicar's wives.

Were his pants found in the pantry or her vest in the vestry?

I fear that we may never have the complete answer for you have stumbled across something very ancient indeed. This fragment is Roman, probably from the time of emperor Terrus Conranus or possibly (although unlikely), Elspetha Davidus. According to researchers at the British Museum, during this period there was a vogue to decorate potteryware not with a patterned design as such, but with runes which suggested the items to be contained therein. This shard was probably unearthed by a gravedigger and cast aside - further research may suggest this is the site of a once-common building or Habitorium. Here, middle class citizens would gather to purchase items for the home which had been popularised by Conranus and his followers, the better to ingratiate themselves and fill his coffers and fund his ever growing empire. Conranus' riches grew and his seat of power lay at a crossing of the River Thames (exactly where Tower Bridge now stands) in London where he built himself a lofty dwelling the better to view his works. However, like all empires, his waned with the rise of opponents like Healus Tottenamus Courtus and the all-conquering Viking, Ikea. I may of course be entirely wrong in postulating this theory and it could be attributable to Homstaurus Britannica, a more lowly supplier of trinkets to the common people of this period. As to preservation, I would suggest wrapping in cotton wool, placing in an old shoe box (preferably Stead and Simpson's) and placing somwhere it's likely to be lost or forgotten.

Brilliant Jon, utterly brilliant. I knew you'd know. Boris Johnson (this blog is a supporter, before anybody starts) would be very pleased at your grasp of Latin. In fact I shall tell him when I submit my design for London's new 'omnibus'tomorrow.

I hope your omnibus will feature an open platform, on and off which people can jump in defiance of the health and safety police.

I may have exaggerated (shurely not)my involvement in the new bus for London, but Boris's brief has included open rear platforms.

SNTV is an acronym for 'Suspected Narcotics Trafficking Vehicle'. What you have picked up is an Secret Police dead letter drop box sign. My father told me about this sort of thing. Probably you have disrupted a whole drugs bust.

Don't forget you found this list of Italian foods near MELTON MOWBRAY. I hope pasta isn't ousting the local fare thereabouts. You'd better go out and buy all the pies you can find, to support local producers.