Find The Fault No 39 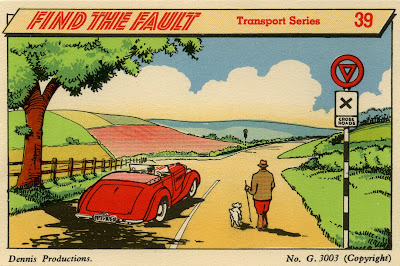 Good morning everybody. I think we'll have lot to talk about here, quite apart from the fact that there are actually two faults, one deliberate and one that would appear to be a genuine error. And has the driver of the lovely open-topped car just finished asking directions from the be-gaitered chap with his stick: "Oh sir, I know how to get there, but not from 'ere".
Posted by Peter Ashley at 08:09

The traffic signs are on the wrong side of the road. And because it is a 'warning' signs, not 'prohibition' signs, they should not have the circle on top, only the triangle (I think). And the white lines are all to cock.

Bingo! Two in one, well done Chris. Good, I can go and have my breakfast now.

First! Yea me!
And extra marks for changing so smoothly from singular to plural in the same sentence!

That pink field is a bit dodgy, surely? Looks like a landscape of Battenberg Cake.

I wondered about that field too. Probably growing some form of opium poppy.

Surely one of the lesser known blancmange-fields of Wilts & Dorset.

I thought the field might be where they harvest the pink half of the coconut ice.

C'mon Diplo, you don't normally give in that easily. I thought you'd have something to say about the fasteners used to secure the roof cover of the car at least.
And I don't like coconut in Bountys, only in Pino Coladas and when I win one at a fair.

The trouble here, peter, is that the sign thing is too easy, so much so that I couldn't be assed to make up some crap about the red Devonian Sandstone plough and the totally inapropriate Sussex rent oak bi-rail fencing. However I do question the way the artist has given the Westy an uncanny stride, he looks like he's engaging the walker in conversation - deviation ! That's not one of the Walmington on Sea Walkers ?

What about the sign on the other side of the crossroads? Its white bits have been stolen, leaving the black stripes to defy gravity. No wonder both driver and pedestrian have stopped to stare!

Surely with the cards being produced by Dennis Productions, they're blue remembered hills in the background?

There is no handle on the outside of the driver's door no doubt to improve it's aerodynamics.

Isn't the warning triangle upside down? Shouldn't it be apex-up?

That's a very interesting point Peter. 1950's Highway Codes tell me that the point of the apex of the triangle should point downwards in these mandatory signs, but I've just noticed my 00 Gauge 'Major Road Ahead Sign' has it point up. Now this is the sort of deeply meaningful discussion that could keep us going for some time.

Triangle up for warning sign without mandatory circle - triangle point down when in the M circle. That'sll I have to say about that.

I hadn't spotted this, but the inverted triangle does indeed look very wrong.

Further OO scale diecast signs at these item references on eBay uk reinforce your case...admittedly it's not an authoritative reference source, but...`

Am now very tempted to buy some or all of these!

I have in front of me one of the original Dinky Toy road signs from 1935,'SLOW, Major Road Ahead', which has the red triangle, point up, inside the circle. However, the road sign set was re-issued in an enlarged and slightly modernised form (school sign changed from torch to children walking, for example) in 1959, and this version of the road junction sign has the triangle pointing downwards. Dinky were often quite accurate about this sort of thing, so I suspect the full size signs also changed during this time. So your "Find the Fault" artist could be quite correct.

ah - you see Martin H. I don't think there's any doubt that an inverted triangle inside the circle is OK - the issue has more to do with the "cross roads" sign being advisory, not mandatory and should perhaps have the pointy-up triangle with no circle. I think it will become apparent that all FTF artists have conditions of varying severity in the autistic spectrum and as such will disregard any of these "errors" - "there is only ONE fault, it's quite obvious really, why are you giving me such a hard time about these trivial inconsistencies. Oh now look what you've made me do ......." etc etc. I do agree about Dinky's ATD though.

Diplo - by Jove, you are absolutely right. Of course, the sign in the illustration is a mere 'crossroads' and not a 'major road ahead'. So ChrisP got it right at the beginning......

Still, quite interesting about the triangles, don't you think?

The dog is not on a lead and really should be as outlined in the Country Code.