Find The Fault No 44 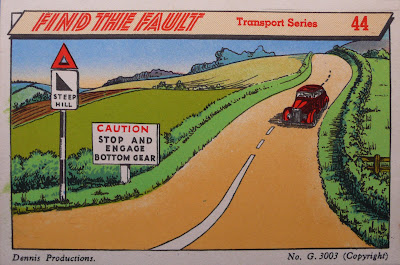 Apologies for that break in transmission. Candles and whiffs of steam are intermittently available, so I'm typing very quickly before the valves get turned off. I hope you think this one is worth it.
Posted by Peter Ashley at 09:47

There`s no danger in going up a steep hill in bottom gear,except perhaps revving the guts out of the engine........so the warning sign is inappropriately sited,and should be at the top of the hill,on the other side of the road so that our intrepid motorist could be warned to use engine braking in case of brake failure.

Well done Bucks. I thought for a moment you could have the steep hill sign at the bottom too, but of course the gradient silhouette would go the other way. I think.

There's just such a vintage United (Automobile Services, natch) sign reminding 'bus drivers to engage low gear at the foot of the hill going up through Ruswarp towards Whitby. But - indeed - no gradient sign.

Ruswarp. That brings back memories. An arched iron bridge over the Esk and the railway on a trellised bridge, both next door to, yes, the Bridge Inn.

Does anyone know if the roadsign I saw last, oh, must be 20 or so years ago on Honister Pass in the Lake District,which I think just read " YOU HAVE BEEN WARNED" is still there ? Hope so....I appreciated its economy of style.A good example of Less being More.

Bucks: That does ring a bell. I think I probably saw it about 20 years ago too.

The other fault in the picture, by the way, is that an artist should not set up his easel in the path of an oncoming car (and one speeding downhill in who knows what gear, at that). The health and safety people should be told about these dangerous goings on!

And another thing.....Were the driver to stop as instructed by the sign to engage bottom gear he would not only be committing an offence by parking too close to a road junction but also causing an obstruction making following traffic pull out to overtake and the cross the solid white line.Is this an early example of Local Authorities upping their revenue by the imposition of fines resulting from such transgressions ? And would the driver really need to stop at all to get into first .Would the lack of synchromesh have caused Peter`s much lamented break ( or should that be "brake"? Ed. ) in his transmission ? I need to be told !

Of course,Martin.Some things must/can never be forgotten...the aroma of warm Castrol R,the whine of straight-cut gears,my little sister`s immaculately co-ordinated and choreographed ritualistic puking in the back of the Old Man`s Ford woodie because of the leaking exhaust.
Keep the faith,Brother !

Oooooh! Castrol R! Now you have got me going! What a shame that the Goodwood Revival is so expensive.....

By the way, my uncle had a Ford 'Woody' which he built himself (I have the photographs). It had wicker armchairs for the passengers and I think it was based on an E93A van chassis. Beautifully varnished too, one of my everlasting regrets is that I was too young to drive at the time he got rid of it.

sorry chaps - been on duty at the guiness factory for a few days - quite exhausted of course and I have a picked up a nasty undetermined pub dancing injury. The principal reason for a wagon or similar to engage a low gear at the bottom of a hill is to avoid down changes which may be required if you attack the hill in top. The down change in a non-synchro box can be very easily missed and a missed gear leaves you hoping the brakes will hold your load. I will search the archive for the photo of the Lamport station master's house with the front end of an Antar tank transporter sticking out into the garden, the rest of the truck and the Churchil tank are in the living room with the ramps and rear-facing gun pointing out over the veg garden at the back - all of this the result of a missed down change half way up Lamport Hill (A508 N'hants).