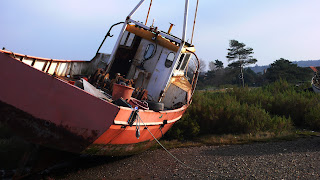 Once it gets into October you can almost hear the North Norfolk coast heaving a well-earned sigh of relief as most of the population retreats back to Chiswick. Here on Brancaster Staithe they just quietly get on with gutting fish, doing something to bags of mussels and putting village notices up in an old Eastern Counties bus timetable frame. And of course abandoning their boats so that they can lean with the weather like the Norfolk trademark pines on the horizon. I did wonder if this vessel ever uprighted itself on the higher reaches of the tide, listening as I did to the first gurglings in the reed-bound mud as the sea once again started to push against the hull of an active fishing boat, (short-wheel based Landrover in attendance). I had to buy a big fresh crab in a brown paper bag for my fish-obsessed ten-year-old from a little wooden hut.
Posted by Peter Ashley at 09:15 13 comments: Links to this post 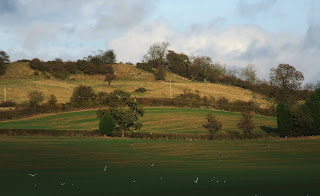 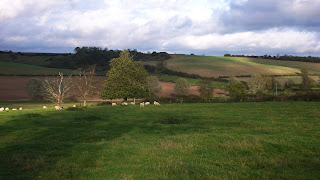 Reaching 478 feet at their highest point, the Langton Caudles (that's the one with the sheep) in south east Leicestershire are hardly the Malverns. But round here this, and Slawston Hill (426 feet), are the big ones. If you want to get a bird's eye view of what's going on in the surrounding villages (not much) then a brisk climb up to their summits is suitably rewarding, even if it's only to see Range Rovers not giving way on the narrow lanes to gargantuan John Deere tractors with equally frightening implements sticking out the back. I've just been out to get essential Sunday afternoon supplies, and the cloud formations contrived to give spectacularly stage-set lighting to their slopes. A timely reminder to never go out without a camera in your pocket.
Posted by Peter Ashley at 15:55 2 comments: Links to this post 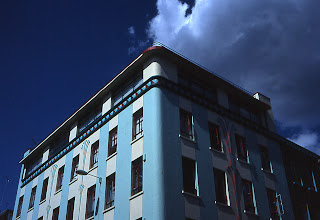 Everytime I duck through Smithfield Market I see this building on the corner of Lindsey Street, just before I dive down Rising Sun Court to the pub at the end. Suddenly you forget the humming refrigerated trucks and the sides of beef disappearing down greasy alleys. Obviously Art Deco in intent, but when I first saw it the fascias had been re-painted, looking for all the world like a background for an early Disney or Tex Avery feature. Indeed it could very easily have been lifted straight from Aldo Rossi's 1991 proposals for Disney's offices in Orlando, Florida. But in case one gets carried away and starts waiting around to see bulbous yellow cars and impossibly bendy red fire engines driven by round-eared mice or sailor-suited ducks, you can bring yourself back to reality by looking next door at Edmund Martin's tripe-dressing premises.
Posted by Peter Ashley at 12:55 13 comments: Links to this post 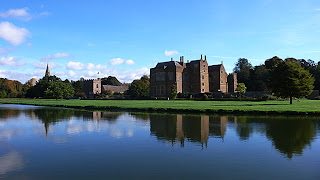 To Broughton Castle in Oxfordshire. A pre-lunch (Falkland Arms, Great Tew) walk in the park, alone except for two Aussies who kept saying 'awesome' every ten seconds. And awesome it is, an early fourteenth century fortified manor house (with a Tudor frontispiece) on a spectacular moated site. A very heady experience, particularly after I'd poked my nose into the church porch and found it awash with lilies. I'd always wanted to see Broughton after Tony Richardson shot scenes for his 1977 Joseph Andrews here. This became the home of the Wicked Squire (Kenneth Cranham) who lures the heroes and heroine to unwittingly take part in his satanic pleasures. Richardson marked the decisive moment between good and evil by having the entourage race through the tower gatehouse (seen here to the right of the church), David Watkin's camera whip-panning into the dark interior of the gateway as the door swings shut against the sunlit church spire. But Henry Fielding's eighteenth century seemed, oh, nearly three hundred years ago on this bright, fresh October morning, with the only sound the gentle drone of a tractor behind the trees. Awesome.
Posted by Peter Ashley at 09:59 1 comment: Links to this post 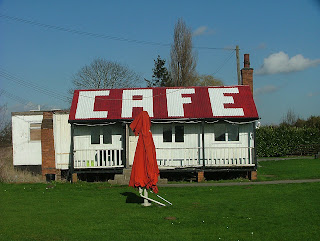 Right. It's time to stop staring at the minutiae of scruffy old Penguin Books and empty Gold Flake packets and get back out there. On the road, seeing what happens; Fear and Loathing On The A1.
I saw on someone's blog the other day that a top ten of roadside caffs was being assembled. One of the candidates put forward was a very up-market pub, the Olive Branch at Clipsham in Rutland. Anything further from a transport cafe cannot possibly be imagined unless under mind-altering drugs, and in any case it's a good way off the four lane blacktop that is the Great North Road. But not much further north is the real thing. A wheezing shack roofed in red corrugated iron at the Cromwell Halt just north of Newark. The lettering (obliterated in the war in case the Third Reich fancied dropping in with high explosives) automatically triggers the senses. It says, as boldly as possible: bacon, sausage, two fried eggs, black pudding and a mug of tea you can stand a spoon up in. On my first visit thick-set truckers with arms like Popeye's shovelled breakfasts down whilst aiming expletives at Tony Blair (remember 'im?) preening himself on a the ceiling-slung telly. I daren't get the camera out inside in case I found the lens slowly clearing of HP Sauce, but in conversation with the owner I learnt that next door to the shack was an air raid shelter, just in case a stray Heinkel interrupted the mopping-up with fried bread. Marvellous. I shall return.
Posted by Peter Ashley at 16:30 5 comments: Links to this post 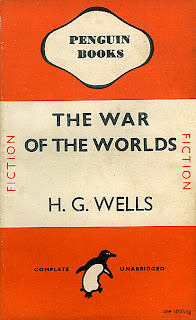 I needed an excuse to put a classic Penguin Book on my blog, and this morning I read about Nicole Kidman remaking The Invasion of the Bodysnatchers. This lead me to thinking about other adaptations of seminal science fiction. A few years ago I heard that Mr.Spielberg was thinking of making a film of The War of the Worlds with the diminutive Tom Cruise, and having recently read the book I thought I would give him some advice about how to do it. I think my letter is behind a radiator in Burbank or somewhere, but the gist of it was that here was a golden opportunity to both make a truly awesome film and also line my pocket as Special Adviser. The trick was to simply follow the book. One world in H.G.Wells' novel is late Victorian England, the other is Mars with terrifying ultra modern destructive power. Put the two together and you have gigantic computer-controlled metal legs crashing down on butcher's boys and grocery shops in Weybridge High Street, Heat Rays scorching-up vicars and melting down Shepperton church. The future would have looked frighteningly authentic, a very literal war of the worlds. Needless to say an English classic novel was rendered down to be yet another great American Idea with no connection to its literary origins.
Posted by Peter Ashley at 14:47 1 comment: Links to this post 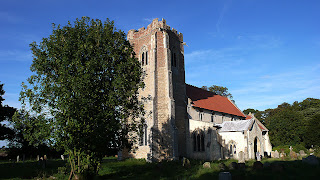 What is it about these big Norfolk churches in the middle of nowhere? If in the very unlikely event you ever drive between Tilney All Saints and Tilney-cum-Islington in West Norfolk you will see Wiggenhall St.Mary the Virgin across the fields. It stands out against a backdrop of trees surrounding the Hall and a towering cedar black against the sky. You'll find it on a cul-de-sac lane that leads out of the village, and then down a footpath that's also someone's driveway. You expect any minute that a dog will remove the seat from your trousers. The church is basically Perpendicular of around 1400 in rubble and plastered brick, and is sadly and forlornly closed and unused. But that remarkable institution The Churches Conservation Trust does care for it, and everything they do should be vigorously supported. The all-pervading atmosphere here is one of deep melancholy. It's very easy to conjure up past congregations walking up the tree-lined road from the village to their beloved church, all of them finally finding rest as the long grasses slowly cover their graves.
Posted by Peter Ashley at 17:53 1 comment: Links to this post 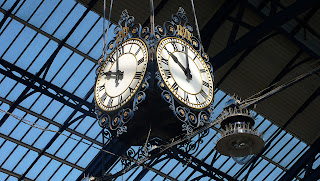 I've been knocking about in Brighton recently. I have to say I love it. Not just watching waves crashing up on the shingle whilst stuffing moules and Kir Royales down in early evening promenade bars, but the whole ambience that comes from that heady cocktail of architectural bon surprise and dodgy raffishness. Regency terraces, steep-laned Kemp Town. Graham Greene's Kolley Kibber hiding his card under teashop table cloths, Pinkie flicking open his knife in back floor apartments smelling of gas. As Keith Waterhouse said, Brighton always looks as if it's helping the police with their enquiries.

Running for an early morning train last week I looked up and just had to snap Brighton's station clock. Four 'Big Ben' style faces mark the minutes over the platforms with the gilded LBSCR letters reminding us that Brighton was once the terminus of the London, Brighton & South Coast Railway. What scenes must this clock have presided over. Racegoers in trilby's, murderers with torsos in cabin trunks. Laurence Olivier and Dora Bryan glancing up at it as they alight from the Brighton Belle. Always with the incessant cry of gulls over the ornate iron trainshed.
Posted by Peter Ashley at 12:21 No comments: Links to this post