I've been keeping scrapbooks for over forty years now. (Takes out onion and violin.) Seven large volumes where I've taken no account that they get even larger when you've thickened them to twice the size with paper and cardboard. Anyway, here's the collage I did for the cover of the first one, the first entries being glued-in on the kitchen table of a Rutland farmhouse in 1976. Everything that appealed to me went in. Dog food labels, pictures of girls from Nova and Sunday Times Magazines, quaint parking tickets, postcards, photographs that never got stuck in an album. They have become a vital resource in sparking ideas, inflaming inspiration, or simply as curious entertainments. So I thought I'd start an occasional series on the blog where I'll choose an item that I can go on about. 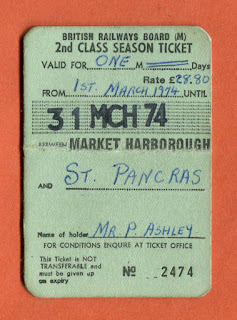 Here's the first, probably found in a pocket two years after its expiry. Remarkable for the fact that it's handwritten in ballpoint and, of course, for that wondrous price for a month's travel. It brings to mind dusty carriage compartments, (either unheated or tropically hot), blokes doing The Times crossword, (getting cross because I'd sit there pretending to do it in two minutes so that I could throw the paper up onto the luggage rack seemingly completed. When in fact I'd written any old thing down just to wind them up), and girls who'd gently wake me up at St.Pancras.
One morning I was late for the train and I had to drive to Market Harborough like an idiot in a borrowed Morris Minor. At one point my country road ran alongside the railway embankment, and I looked up to see my train approaching the station. I repeatedly sounded the horn, which was answered by a 'bar-bop' from the locomotive. I slewed onto the car park and ran up to the station, probably leaving the engine running. The train driver shouted down from his cab "Hurry up!" and racing up the platform stairs I found the guard holding a door open for me. Phew. Now you really won't see that anymore.

Posted by Peter Ashley at 12:29 6 comments: Links to this post

A treasured photograph from our family archive. This is a Buckinghamshire County Council road gang with their steam roller, out on a Chilterns road sometime in the 1930s (I should think). All in hats and caps, two with ties. The gentleman standing third from the right is my Uncle Joe, in fact my great uncle, being the chap who married my mother's Aunty Dora and lived in Lee Common. Readers of English Allsorts will remember my story about the faux Player's Digger packet, featuring Joe in the fifties.
I've always found the photograph curious for three reasons. Firstly it must have been unusual for a road gang to have been interrupted in their labours repairing road surfaces in order to pose for a group photograph. It makes me think that perhaps it was a picture taken by a press snapper, probably from the Bucks Examiner. Maybe accompanying a story about the gang finding treasure in a ditch at Ballinger Bottom, items of silver church plate wrapped in a hessian sack. But I digress, except to say that I checked on the Bucks Examiner and it now appears to be called 'getbucks' and has stories like 'Flasher exposes himself to woman walking in Marlow'.
Then I think that the diminutive chap second from the right must be an ancestor of Robbie Williams, but more disturbing is the third curiosity that I only noticed quite recently. Whilst the men are posing proudly in front of their steaming roller, a hooded M.R.Jamesian figure appears to have climbed up behind them in order to surreptitiously take the controls of what I see is an Aveling & Porter Invicta with its beautifully embossed prancing horse motif.
Posted by Peter Ashley at 11:40 9 comments: Links to this post