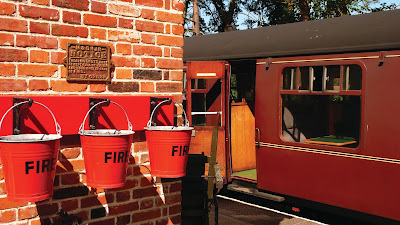 Sorry about my absence. I have now moved to my other piano, as it were, and so can speak to Unmitigated England again. But thankyou to Only Daughter for stepping in, and Commentator Diplo for both verbal and written warnings to pull myself together. So how about this? On Saturday afternoon we raced over to Norfolk in order to get the remaining photographs for a book chapter. Without having seen a timetable, or even knowing exactly where it was, we broadsided to a halt at Holt, the terminus of the North Norfolk Railway line from Sheringham. Arriving on the platform I looked at the schedule. The trains were alternating between steam-hauled and diesel, and the next one was steam at 3.23pm. I looked at my watch. 3.23pm, honestly. And then immediately heard the screech of a whistle over the Norfolk pines. Youngest Son stared in astonishment as the black tank engine arrived with its rake of BR maroon coaches, tightening his grip on my hand as it clanked by with that heady scent of steam and oil. He's still talking about it.
Posted by Peter Ashley at 12:50 21 comments: Links to this post

Only Daughter speaking - Dad's internet has stopped working, again - will be back with a post soon.
Posted by Peter Ashley at 12:37 2 comments: Links to this post 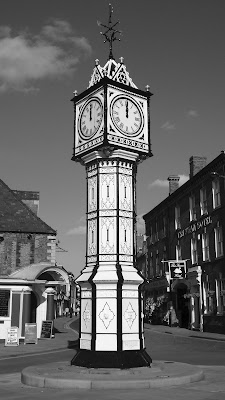 I will be in Wales (yes, really) for a couple of days , so you've got plenty of time to mull this one over. One of my favourite timepieces in a town now by-passed. If that helps.
Posted by Peter Ashley at 07:00 29 comments: Links to this post 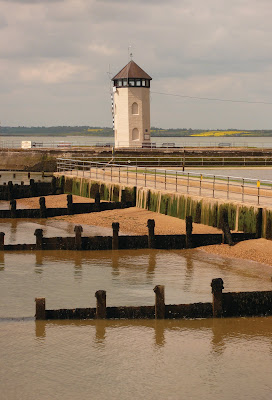 Further to my stumbling attempts at showing you Brightlingsea on Tuesday, here's another photograph from the same location on my day out in estuarial Essex. The reason why I've been spending time here will become clear, but I just wondered if anybody knew anything about this tower? Just a name would be good. Most of it looks Victorian, but the top is obviously comparatively new. The Ordnance map just says 'tower', unhelpfully. I expect it's used as an observation post for local yacht racing now, the commodore sitting up there with a big pair of binoculars. I was going to say with a packet of twenty Senior Service open on a navigation chart of the Colne estuary, but that's probably unlikely. My first encounter with those fantastic russet-sailed Thames barges was here in Brightlingsea in the late 70s, much later I actually helped 'crew' one, ie: went and hid in the cargo hold when the wind got up. Avast there, land ahoy,your turn in the barrel!
Posted by Peter Ashley at 17:25 3 comments: Links to this post 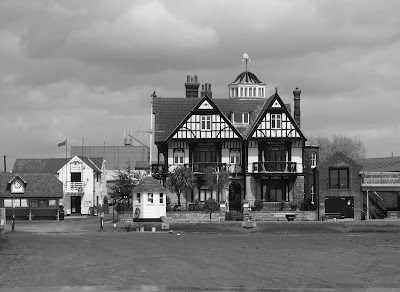 Sorry there hasn't been much from this blog recently, but I've been pounding the roads of Unmitigated England. So yesterday found me here. I'd not visited the place for about twenty five years, and the memory of it is somewhat impaired due to certain excesses. Of course that's hardly a clue as to its whereabouts. As will the fact that I ate the worse fish 'n' chips here I've had for a long time. How it is we can get brilliant suppers and lunches here in the centre of England and then get let down so badly right on the coast?
Posted by Peter Ashley at 07:42 32 comments: Links to this post 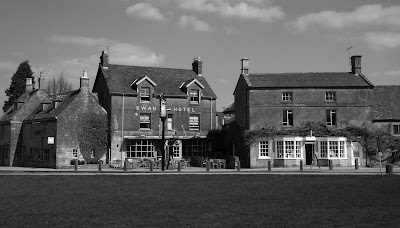 Funny old place this. Not very Unmitigated, for all its honey-coloured architecture and sweeping greenery (no ball games). Perhaps it's all a little too self conscious, like a beautiful old lady who's had a lifetime of everyone gawping at her and saying how beautiful she is, but actually looking a little askance at all the attention from complete strangers. I was one of many strangers here early on a bright April morning, thankful to find a bacon sandwich after one 'cafe' had met my request as if I'd just gone in there and dropped my trousers amongst the cake stands.
Posted by Peter Ashley at 07:00 18 comments: Links to this post