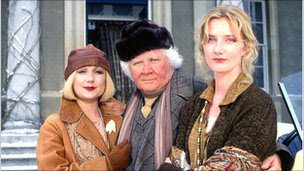 So sad to hear this morning of the passing of film director Ken Russell. One imagines him now in some gothic Valhalla surrounded by Elgar, D.H.Lawrence, Mahler and Oliver Reed. Who is leading him to a heavenly champagne bar staffed by seventeenth century nuns. Ken was an enormous influence on me in the sixties and seventies, first with the groundbreaking television films- Elgar (after which my father, on seeing the director credit said "We must watch out for him), Song of Summer (the last days of composer Delius); and then the superb feature films- Women in Love, The Devils, and later Gothic and The Rainbow. A flawed (thank goodness) genius, I had always meant to track him down to his cottage in the New Forest where he ended his days alone. Now of course, he is largely forgotten by most of today's audiences who, if at all, will only remember his ill-judged but mercifully brief stay in the Big Brother House. I'm glad, though, that his work, in particular The Devils, was championed by critic Mark Kermode, and that this masterpiece is now finally going to be very belatedly released on DVD. I shall hook-up my videotape player tonight and give it a spin, raising a big glass of something good to a true master of English cinema.


(That's Ken in the middle of the photo above, with Lady Chatterley (Joely Richardson) and camera left his third wife Hetty Baynes.)
Posted by Peter Ashley at 12:21 15 comments: