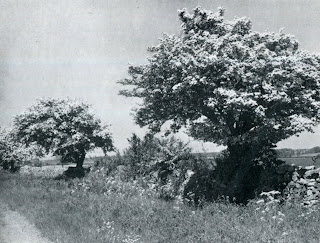 I stood next to that David Attenborough in a Leicester pub back in the 80s. He had a pint of Bass and a curry in a bowl, just like me. But this isn't about him (Happy Birthday), but his dad, Frederick Attenborough, who was once Principal of the University College in Leicester from 1932-1951. One of his mates was the Reader in English Local History, W.G.Hoskins. In the late 1940s the latter wrote two brilliant little books, Touring Leicestershire, and Rutland. Both were photographed by Frederick, and son David remembers helping out by trying to get cattle in the right places and, as my own children will testify, probably counting down the seconds before the sun emerged from behind a cloud whilst the photographer's eye was pressed up against the viewfinder.

I was reminded of the Rutland book this morning, as I drove down local lanes and noticed the new growths of cow parsley starting, and the about to burgeon hawthorn. I thought of the photograph above, of an old drovers' lane near Empingham, and wanted to share it with you. I was a little surprised, however, to see that Hoskins' caption was 'High Summer near Empingham' when it appears the cow parsley is only just about to invade the verge. No matter, it's an image that always comes to mind at this time of year, and I look forward to wandering these quiet lanes again. Amongst others it was Hoskins who ignited my interest in the English landscape, and in 1995 I obtained permission from his publishers to use sections from his inimitable Shell Guide to Rutland for my first little book Rutland Much In Little.