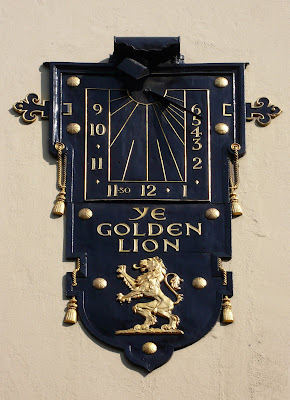 You've got to watch what you're doing walking around Soho with your head in the air. The Golden Lion pub sits on the corner of Dean Street and Romilly Street, and I came off Shaftesbury Avenue with a purposeful stride (walking to an imminent lunch on Tuesday) and took a chance to study the sun dial. I can't quite work out the shadow of the gnomon, but it might just be telling the right time. Lions of all colours are often found as pub names, having appeared on the arms and badges of kings since the 12th century. We've still got one now, rampant on the royal crest in heraldic companionship with the unicorn. The Red Lion is still the most popular pub name, but we'll often find a gold king of beasts with a paw resting on a golden ball. Golden Lion pubs are often nicknamed Brass Cats. This particular one probably had an Art Nouveau make-over in the early 20th century, when the definite article was revived as 'ye' to denote old age, as in Ye Olde Tea Shoppe. What else can I tell you? Well, Dennis Nielsen pick up murder victims here and some nutcase once blew the toilets up. And it has been known to charge £3.30 for a pint. No wonder my step quickened up Dean Street.
Posted by Peter Ashley at 15:01

Good point. I wonder if it's to do with the dial being designed just for this wall, and because of it facing west, and there's a tall building opposite, whether the sun only falls on it during the marked hours. Yet more Soho research.

It's a bit more prosaic than that: it is, in fact, an early Combo Dial. After 6 at night, one is inside drinking; before 9, one is asleep. In both instances, why would you care about the time?

I'd forgotten about the Combo factor. And I do hear that he knows this particular area remarkably well.

I like these lions. A personal favourite is the White Lion at Upton on Severn, Worcestershire, which has a big 3D sign with a golden mane.

Memoirs of a Heroinhead said...

My father (Archibald Graham Allen)was the 14th victim of Nilsen... You can visit my blog to read about it.