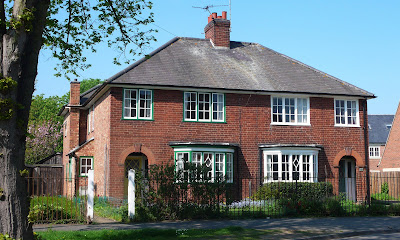 Rare these days to find an untouched pair of semi-detacheds. Even more so to find them within a mile or so of each other. The top ones are in Little Bowden, which joins on to Market Harborough on the south east, and the others are in Great Bowden, which joins on the north east. For a large fee I will do a conducted tour for film location finders, who will be blindfolded until we're outside. The windows look right to me, and I can vouch for the front doors being original. Unsung domestic architecture, both pairs stand alone, that is neither are part of any vast interwar development. Some people have a problem with rendering, as on the Great Bowden houses, or 'pebble dashing' as it's more popularly known, but it's fine by me. Although I lived in a house coated thus in Kent, and during the Great Storm of October 1987 thousands of tiny stones were blown off the wall and against the bedroom windows as I lay in the foetal position on the landing. But rendered or not, I think there is great charm in these original pairings. All they need is a Morris J-Type bread van parked outside, or a proper postman in dark blue serge sifting through letters on the path as mum shakes a yellow duster out of a bedroom window.
Posted by Peter Ashley at 15:41

The top two have a mini lutyen feel.

I thought you were going to report that they have lightning conductors fitted. Another craze that died out.

Ah - the yellow duster signal to the postman eh ? sounds a bit desperate.

Nice that they have adjacent trees, providing dappled shade – and cover for the postman as he awaits his signal...

OMO packet was always the signal in the prefabs. Nice observation of the seemingly ordinary Mr.A. Nothing's ever what it seems.

Right then - please take note.
Lovely crease tile corbeled springers and bell-drip above the porch opening on the 'dashed number - quite keen on the cast concrete path too.

More crease tiling springers on the brick property under the rubbed brick arch, very striking. What about that green/white combo - marvelous, widow living there, has done from new. Reduced garden maintenance (Since Reg passed) limited to the "front". Side garden let go a bit - young Terry (little bugger) promised to keep it tidy in exchange for keeping his motorbike in the shed - all Reg's tools gone now.

Very keen on the utility "wing" down the side - pantry, bog, scullery,boiler etc etc.

Front elevation - beautifully guaged brickwork from the days when drawings had brick numbers and fractions thereof, rather than dimensions. Fine use of hand cut queenies ......MORE DESIGN....

Looks a tad 'Google Street View' to me. Watch out. Someone might complain that you can see them through the front window doing up their fly buttons. Moreover, what other fifties classics could lurk in that wooden shed. Perhaps a B.S.A. Winged Wheel, or a Lambretta LD 125 bought later when things picked up. It's plastic tartan panniers cracked with ultra violet radiation from the sun streaming through the window.

Diplomat - completely agree about the green/white colour scheme - lovely. The brickwork though is flemish bond (alternate headers and stretchers), so the cut bricks at the corners would be Quarter bats rather than Queen closers, I think. Quite right about the brick "rubbers" over the porch, this was a technique with soft bricks literally rubbed together to form a close jointed arch of wedge shapes. It's more often seen over Victorian windows. Must be a completely forgotten skill now, more's the pity.

Martin - i think we may need to take a closer look. How a bout - Facings to the street elevation and commons to the "utility" wing - thats spec' build for you.

This is starting to look like the letters page of Brick Monthly. Good stuff, pass me my trowel.

Ah yes, 'Brick Monthly'. Used to subscribe but I thought it went sadly downhill after the 'Breeze Block Gazette' takeover.