Find The Fault No 5 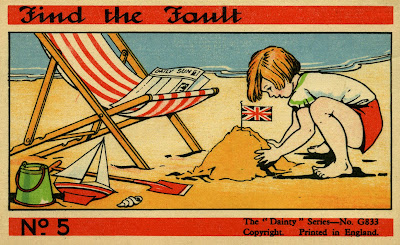 Are we fed up with these yet? I'm happy if you are, but just thought I'd ask. So, we're off to the seaside this morning, a harbinger of sunny days to come we hope. My first holidays were spent on the Lincolnshire coast in a bungalow at Anderby Creek (sounds like something out of the Secret Seven doesn't it?), and the memory of jumping down from the verandah with bare feet into soft white sand is still very fresh. Being Strict Baptists in the 50s we had Sunday School on the beach, two families listening to my father talking to us in his rolled-up trousers. We never forget him getting a large piece of newspaper out of his pocket, and unfolding it to reveal a cut-out letter 'S'. He asked us to tell him how many things we could see beginning with the letter. I still find it remarkable how many there are: sun, sea, sand, seagull, ship, seaweed, starfish, swimming costume. And I must have pointed to my cousin Sue at one point. Heady, carefree days. Kite-flying, serious cricket matches on the firm sand when the tide receded to Holland, trips to a corrugated iron watch tower at Donna Nook with a door banging in the wind (ah, that's where it comes from). And hoping my older brothers and cousins would let me play with the clockwork train set we'd brought on a real steam train all the way from Leicester to put up in the attic. Mmm, let's all go there now.
Posted by Peter Ashley at 08:11

Oh dear oh dear - I see a deck chair accident about to happen. Careless use of the notch-adjustable back stay leading to uneven weight distribution will sure to cause a YBF moment when Granma returns to her seat. Always check you have located the transom in the corresponding notches at both sides - or else .....!

Bucket's got the handle on the wrong end. Union Jack may be flying upside down but difficult to make out. Yours, pathetically, a seaside resident.

I wondered about the deckchair Diplo. Obviously put in there as a red herring. Mr.Dudley gets the Spam sandwich with sand in it. Card does indeed say: Handle should be on top of child's bucket.

Hurrah! hurrah! please may we go and watch the Punch and Judy now? and please, please may I have one of those legionnaire-style white caps with a green celluloid peak and a flap at the back to protect my neck from the scorching sun - please?

Oh for goodness sake! You three are PARENTS - and yet you cannot see that this little girl is being allowed to play without a) a Sir Liam Donaldson regulation sun hat (Parenting Rule 37c as Amended 2007, part vi) and b) being slathered in Factor 328 sun cream? That and the fact that she is near a copy of The Sun which, should she see Sunny Sue's Summer Sizzlers on Page 3, will inevitably lead to her becoming a sex-crazed lesbian nymphomaniac teenage mum.

Crank up the charabanc, we're off! Affer, you can be the custodian to watch over us with an Acme Thunderer whistle and a wagging finger.

Ah, Mr.A religion and the seaside always used to go together so well. Much more conducive to the appreciation of The Good Lord's word when the sun's out and there's a free bottle of pop after singing a couple of rousing hymns. And always a smattering of attractive young vicars daughters to keep the hoi-poloi amused. Ding! ding! hold very tight please, next stop Frinton!

Don't get me going Jon. Religion on holiday. After the early years in Lincolnshire it was your south coast. (Southdown or East Kent coaches, green electric trains to Sandling.)First thing we did on arrival in places like Hythe was to trudge the streets to find a likely chapel for the following morning. If my father didn't like the look of it we trudged on. Ended up in the Hythe Salvation Army Citadel once. That was brilliant actually, evening sun shining on tubas. Pardon?

That sounds very attractive...if only it didn't have to form a such a rigid part of your everyday life. The Sally Army play carols around our way at Christmas...v.festive and it's moonlight on tubas then. We make our obligatory donation and scamper back indoors for a soothing glass or two of Port. Religion done for another year. I too was made to attend bible study classes as a youth...

Don't see it myself - that's a standard Daymer Bay '67 issue sand castle builder's bucket with the handle thoughtfully placed at the closd end, allowing smooth mould release with a slight twist and up-ward action. The Deck Chair answer is obviously correct and I suspect your answer is a printing error at the factory - let's keep our eyes open for the card to which the bucket handle solution actually applies !

To answer your first question, definitely not fed up yet! Do keep them coming.

Great memories of childhood holidays - although mine always seemed to involve becoming ridiculously sunburned by the end of the first day.

Admit it Diplo, this is the one card missing from your otherwise identical pack.

Look. Diplo's obviously right. That deckchair is a can of worms. Whoever put the answers on the cards had obviously had one too many glasses of post-Sally-Army port.

And another thing. When was there a newspaper called the 'Daily Sun'?

I do think Diplo has a case - albeit not as strong as my charge of bad parenting. In fact, given the obvious deficiencies of those parents, it seems more likely that the chair is not so much badly drawn as badly erected. Meanwhile, I am now concerned that the boom vang on that marconi rig is improperly mounted and could cause a breech. The bucket is just a side issue - got one just like that myself.

You know, I'm starting to lean a little towards Diplo's thinking here. I think the original puzzle was the deckchair, but the artist got overuled in favour of the bucket. With a covert snigger to him/herself the first idea stayed in there. And Wilko. Yes, there is a Daily Sun. In Arizona, which probably doesn't count.

I refer you back to my comment on perspective, - puzzles passim. Being so clearly the winner I am already enjoying the first bottle of the case of Puligny Montrachet 2006 that Mr.Ashley so kindly sent me as a prize. Fancy you poor sports stooping so low as to attempt a pincer movement in a kind of rally round the deckchair sort of move...just started the second bottle. Very nice it is too - my! victory is sweet!

Wow someone else who has spent time at the Creek. Ian's father used to have a caravan on the Sunkist site, the first on the right as you turn off the Chapel to Sutton Road. A peaceful haven away from the amusement arcade madness that is the norm for this stretch of the East Coast.
A bit late but we did get the bucket at the second attempt.

Keep the puzzles coming.my childhood hols where spent staying with family in Totnes or Nantglyn doing pretty much the same stuff as described,wonderful stuff.

Peter: as you know I only started going to Lincolnshire in the 1990s on The 51 Club weekends. Sodding static caravan in Ingoldmells surrounded by about 1,200 other sodding caravans. Champagne breakfasts at The Little Acorn caff with the day's specials on those cut-out orange fluorescent star cards stuck to the windows and walls. And then on to The Bell and merciful oblivion about ten hours later in Skeg. Wonderful.
Thud: Totnes eh? You didn't know a Katy Thomas by any chance did you? Chemist's daughter as I recall.

Lincs loomed large in my childhood too. And after a few days in my grandfather's silent cottage in the middle of a field (cowpats a speciality) about 4 miles inland from Theddlethorpe, I was ready for the amusement arcades of Skeg and Mablethorpe, I can tell you.

Ron,fraid not...I do remember the main chemists was on the top left of the high street though..my fav shop was the tackle shop that sold ice cream.

Wonderful beat ! I wish to apprentice at the same time as you amend your site, how can i subscribe for a blog website?
The account helped me a acceptable deal. I had been tiny bit familiar of this your broadcast
offered bright transparent concept

Do you have any video of that? I'd care to find out some additional information.

Thanks for the good writeup. It in fact used to be a entertainment account it.
Look advanced to more added agreeable from you! By the way, how can we keep up a correspondence?


my weblog ... tips to have blonde hair