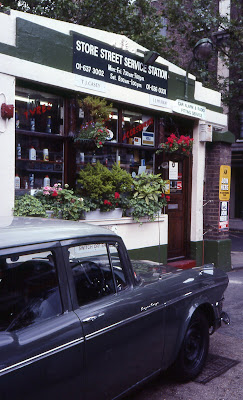 Going on about Humbers brought to mind this little filling station. A couple of years ago I walked round here to find it painted pink, and I've got an odd feeling it may now have dispensed the last gallon of unleaded. I found it on a dull June Saturday afternoon in 1990, when I wandered round the back of all those furniture stores on Tottenham Court Road after being led submissively around Heal's. It was easy to imagine Luton vans in the 1930's being primed with petrol here after being loaded-up with Elysian sofas and weathered oak beds destined for the new garden suburbs. In nearby Torrington Place Heal's vans were packed with new mattresses. I couldn't believe my luck when I found the Humber Super Snipe parked outside, its colours perfectly complementing the garage paintwork. Later I learnt that the garage was put here to serve the Duke of Bedford's Bloomsbury Estate, and as such is very likely the earliest petrol station in London. I'd be very grateful for any news (it was on the corner of Store Street and Alfred Place), but in any case it's well worthwhile standing opposite Heal's and admiring the superb decorative panels on the front elevation.
Posted by Peter Ashley at 15:30

Labels: Four Posters, Head Over Heal's, Sacking In The Backs Of Vans

A splendid picture and I remember this place well, in both the livery you show and the startling pink incarnation (pink in carnation?). I hope someone knows if it's still there.

Am I alone in thinking Super Snipe a rather silly name for a luxury car? Imperial, Sceptre, and even Hawk seem more uplifting somehow.

Alas, it closed down last summer. Now boarded up, and distinctly unphotogenic.

Thankyou dgeezer. Another one bites the dust.

Ah - the Super Snipe, memories flooding back of my being run over, the driver was Scottish. I quite like the rakish pose struck here by a different class of owner who's running sans hub cap - very flying squad.MORE VILLAINS !

Missing hub cap, and such a column change. Wonderful.

Good point about the branding Wilko; the snipe is such a weedy bird. What about the Humber Hoopoe? Now, that's a very naughty bird and that is anything but a naughty car so that's probably not right. The Humber Hawfinch? Lovely little birdy with a sodding great beak, almost regal, but perhaps a bit small. The Humber Greylag Goose? Much more stately that bird, distinctive slow wing beats in flight and hygienic nesting habits, unlike the Hoopoe, about which the less said the better.
I'll be off then.

Ron's scholarly treatise on birds (near Master's level) provides considerable scope for further suggestions. Perhaps there should have been a Morris Turkey, or maybe an Austin Oozlum.......