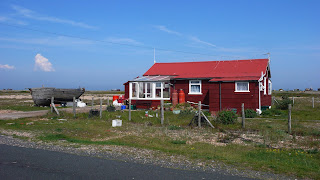 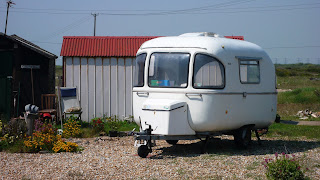 And so to Dungeness in Kent. The green sheep-spotted Romney Marsh suddenly giving way to drifting shingle, sea kale and rusting winches. After a mile or so's trudge across hot stones and a dismantled Southern Railway line to photograph the 1930s concrete Sound Mirrors for Classic Constructs, the Ashley Caravan Serai moved south onto the peninsular proper. Here in the unique and, quite rightly, conserved area, everything changes from bleached bungalows and double yellow lines to bleached shacks and double helpings of Unmitigated England. Nothing looks permanent here, the shingle 'gardens' blurring into each other, weatherboarded dwellings trying unsuccessfully to hide the abandoned railway carriages at their heart, uncompromising plants clinging to the salt-swept pebbles. Everything ignoring the grey abstract of the nuclear power station humming on the shoreline. A 6,000 acre triangle of land formed by opposing currents of the English Channel, the light bounces off both stones and sea to turn it quite literally into the most brilliant place on the coast. And then up the Old Lighthouse to see it all from the gull's-eye view, striations of old sea banks and Union Flags fluttering at the backs of tarred sheds, the light railway steam locomotive simmering like a kettle that's escaped from the red-roofed cafe. And the Britannia pub with Shepherd Neame, smoked mackerels and Doctor Feelgood. I came down the steps and bought a novelty salt and pepper set modelled on the lighthouse, and then got into such a deep conversation with the curator about this being the setting for H.E.Bates' The Lighthouse that I left them on the counter. Anyway, a cyber seaside souvenir for the first to correctly identify the caravan. I honestly don't know myself, but, like everything else here, it's burnt like the hot shingle into my memory.
Posted by Peter Ashley at 08:04

The caravan looks like a cross between an Alpine Seilbahn, a Soviet supply helicopter and an early Piaggio Ape. I want one.

Now - this is unmitigated Ashley at his best. The rush of enthusiasm is alarming yet irresistable, crystal clear images invade the brain as can only be achieved by evocation, "sea kale and rusting winches" - absolutely ! The pace is maintained through the beer, the light and eventually the dissapointment of the abandoned souvenir, the latter perhaps all the more memorable for being fogotten. TOP STUFF keep 'em coming - so to speak.

Yes, Mr Ashley is certainly pumping them out at the moment. Keep it up!

Sea kale. I just did that. A pint of Fuller's Honeydew in The Doves. Snarf.

Excellent post Mr Ashley. Me, Fibonacci Mater and Fibonacci Minor rode on the RH&D to that very lighthouse quite recently. We loved the railway, and the view. Picked up an ornamental condiment set on the counter. Chap said some bloke had been in wearing Spandex pants and talking caravans; he'd left them behind and we were welcome to them. I have them here at Fibodyne Industries head office, in a blue plush lined box with a glass front and fairy lights for added drama. I'll send them on.

I spent much of my youth in caravans (don't ask) but don't recognise this specimen.

I see from Mr Fibonacci's comment that you now have your salt and pepper pots. Now you can forget about them again and they will join the exalted ranks of the reforgotten, the doubly ignored treasures so beloved of Iain Sinclair.

I once asked a friend, not known for partaking of the humbler pleasures of the English seaside vacation, what he had done on his holidays. "Pete," he intoned darkly "I have been crouching in a caravan".

I have wasted sodding hours on obscure Anglo-Saxon/Antipodean (don't ask) vintage caravan sites looking out for that bleeder, but no joy. Still better than working I suppose. Anyone got any spare gas mantles? I think I may have bought a 1937 Buccaneer DeLuxe on e-bay by mistake.

Oddly enough Ron, I do have a spare gas mantle. The box has a picture of a lamplighter knocking the glass out of a lamp with the end of his ladder. But the lamp is still lit, and the lighter is saying "Lumme, bet that's a Veritas". Does this help?

It's not one of Patrick "Bakelite Museum" Cook's 'pod' caravans is it?

Mmm. Certainly the sort of thing Ten Inch. Pod construction would seem right. Perhaps we need to contact somebody at the Caravan Club, or even Margaret Beckett. She'll know.