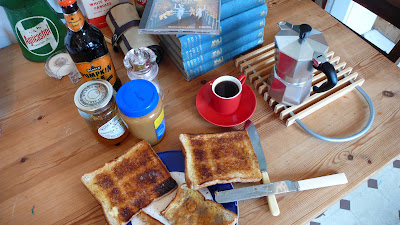 What is it about blokes photographing their breakfasts? This blog is in response to fellow blogee Ron Combo putting his half English up yesterday, an idle shot snapped whilst I listened to Martin Jones hammering-out Percy Grainger's Dished-Up For Piano Volume 1 over my toast. I also thought it very intercontinental that he has sausages and scambled egg in hot Piedmont as I pour espressos out from my new Bialetti on a foggy autumnal morning in Leicestershire. But none of this explains the need to photograph our food. I put my Sunday breakfast as the frontispiece to More from Unmitigated England, and I once travelled all over Europe with renowned lensman Carl Warner, (who has turned food photography into art, literally), snapping detergent factories, and every morning he got his Hasselblad out to go 'Ker-chunk' over croissants, wild boar salamis and giant handle-less cups of coffee. The only eyebrows that got raised in questioning surprise were in Saffron Walden. Well, it must have seemed a bit much, even there. So Ron, here's mine. The first slice of toast was spread with Gentleman's Relish, and the bottle of Badger Pumpkin Ale was the only thing moved into shot, an homage to Ron's Pedigree. I wonder if my lunchtime boiled egg will be this exciting.
Posted by Peter Ashley at 10:06

Hmmm, you got it all in didn't you? Nice shot, I can almost crunch the toast in my slavering gob. I trust you drank the Pumpkin? And what was the Sellotape doing there? Running repairs on a hamster?

That's a simply disgusting thing to say Ron. As if I would down a bottle of Badger at nine in the morning.

Cor! I like the Grainger! I'm going to listen to the Arrival Platform Humlet and Gum-Suckers' March now, before going to stock up on Tiptree Marmalade.

To put Ron's and Jon's fevered minds at rest, the Sellotape was for wrapping up my eleven year old son's birthday presents. Sometimes life can be so deceptively simple.

And what are the runes burned into your bread? These coupled to the crossed knives only add to the mystery. What were the gifts, by the way? Dinky toys?

The presents will have to remain a secret for a while Jon, you know what it's like, prying eyes and all that. Yes, I noticed the toast runes, but think it's a defect in the toaster rather than a message from God.

Nice work Mr Ashley! I thought I was the only man ever to photograph his breakfast. In 2005 travelling incognito as Perry Venus with Mr Ian Marchant for his book, The Longest Crawl. I 'collected' 30 consecutive breakfasts form The Scillies to Shetland. Can anyone beat that? Feast your eyes on every one at his web site if you're feeling hungry...

Welcome Mr.Williams. Tell me, which was the biggest one you photographed?

Probably the one that left us most queasy. We'd had a lengthy call of duty session the day before and had arranged to meet at the Fox and Anchor, Smithfield. At table by 7.30am with pints at our elbows. Never again. As they say.

I've often wondered about Smithfield drinking. Can you really drink beer and eat steaks at four in the morning? I need to know before I take the train down.

Sadly THIS has happened to the Fox and Anchor; I quote this from the Times...

The Fox and Anchor is the latest invention from the Malmaison/Hotel du Vin camp. It’s a radical departure from the boutique hotel offering – an old fashioned pub with just six bedrooms – no trendy bar, no brasserie – just real ale and good pub grub.

Downstairs are all the hallmarks of a Victorian pub – colourful tile work, mosaic tiling, a mahogany and brass bar and leather banquettes lining one wall. The walls are adorned with black and white photos of burly butchers from the Smithfield meat market opposite, and the bar is topped with jars of pickled eggs and pork cockles.

In the back room are a number of tables separated by wood panelling and candlelit at night – it’s more intimate but maintains the feel of an old London pub.

That said, there’s a little of the Malmaison touch in the décor upstairs – a Gothic colour scheme of dark, broody browns hues, with cushions in soft velvety textures.

I'm glad it's retained the 'feel' of an old London pub, but I 'feel' it was better as an ACTUAL London pub.. hey but what do I know?

If you are in Hampshire and thirsty slash hungry my old mucker Bob Machin runs a jolly good foody web site. He has impeccable taste in these things and has seldom taken me to a rotten pub. I'll post the web address if you are interested. I'm not sure about whether it's U or Non-U posting unsolicited links?

We'd all want to know about it I'm sure, thankyou.

and lateley as a blog at

This momentousdecree wow gold came as a great beacon gold in wow light of hope buy wow gold to millions of negroslaves wow gold kaufen who had been seared in the flames of withering injustice.maplestory mesos it came as a joyous daybreak to end the long night ofcaptivity.but one hundred years later,maplestory money we must face the tragic fact thatthe negro is still not free.maple money one hundred years later,sell wow gold the lifeof the negro is still sadly crippled by the manacles ofsegregation and the chains of discrimination. one hundred yearslater,maple story money the negro lives on a lonely island of poverty in themidst of a vast ocean of material prosperity.wow powerleveling one hundred yearslater,maple story power leveling the negro is still languishing in the corners of americansociety and finds himself an exile in his own land. so we havecome here today to dramatize wow powerleveln an appalling condition.in a ms mesos sense we have come to our nation''s capital to cash a check.when the architects of our republic wow powerleveln wrote the magnificent wordsof the constitution and the declaration of independence, theywere signing a promissory note maplestory power leveling to which every american was tofall heir. this note was a promise that all men would beguarranteed the inalienable rights of life, liberty, and thepursuit of happiness.it is obvious today that america has defaulted on thispromissory note insofar as her citizens of color are concerned.instead of honoring this sacred obligation, america has giventhe negro people a bad check which has come back markedinsufficient funds.justice is bankrupt. we refuse to believe that there areinsufficient funds in the great vaults of opportunity of thisnation. so we have come to cash this check -- a check that willgive us upon demand the riches of freedom and the security ofjustice. we have also come to this hallowed spot to remindamerica of the fierce urgency of now