A Stroll Down Park Drive 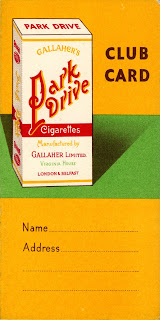 Park Drive cigarettes were Ulster manufacturer Thomas Gallaher's response in 1897 to the popularity of Woodbines. Cigarette Land had quirky regional preferences, and cheapo Park Drives were taken up as the fag-of-choice by the men of the Midlands. This was the cigarette I saw covertly cupped in the hands of road roller drivers, clamped in the mouths of hod carriers as they ascended ladders and, in my case, seen left burning on the edges of studio lightboxes and wash basins alike. In Cigarette Pack Art, Chris Mullen talks of the pack design as the most anarchic of the three snout contenders vying for the popular vote (the other two being Woodbines and Player's Weights). "...the swellings of the letters too extrovert in behaviour...". Will packaging archivists of the future talk in such terms of the Francis Bacon style photographs of diseased offal that now grace cigarette packs? "Sovereign upped the stakes with a graphic disembowelling". I love this little blank club card, and the thought of it being used to save for Christmas fripperies down at the newsagent. On the back there's an ad. for Manikin Cigars and a space for writing 'Goods Laid Aside'. Inside, above the columns for cash entries and signatures, it just says 'Park Drive For Pleasure'. Exactly.
Posted by Peter Ashley at 09:31

Labels: Behind the Bikesheds, Blue Wreaths of Smoke, Got A Light Mate?

I've read a couple of Battle Of Britain biographies where the pilot has chucked a pack of Player's Weights to the German he's just shot down. Must have been an RAF favourite.

Thanks Ten Inch. I need lots of stories like this.

I remember Park Drive so well. But I'd forgotten all about Player's Weights! Thank you...what was the pack like?

One of the great attractions of Weights and Woodies was that they could be purchased in 5's; a great thing when this 14-year old's pocket money didn't meet the price of 10's! I had it in my mind that the Weights packet was (later?) a beige colour - but now I wonder if that might have been a tipped version. Anyway, Weights were better than Woodies (more tightly packed)but did have the annoying habit of sticking to the lower lip somewhat. Removal meant losing skin and a day's snogging with Angela Brocklesby.....

Afa you're right, the later packets of Weights were indeed a beigy cream. Very boring when compared with the originals. Pride of my collection is a 1906 paper packet of Woodbines, open-ended with the original fags inside. I wonder what they'd smoke like?

I'm with Vinogirl: we need to know more about Miss Brocklesby.

Was Angela Brocklesby from the eponymous estate in Lincolnshire, where Lord Yarborough had his own railway station? I do hope so, I'd have snogged her too, with or without a Woody stuck to me.

Careful with that Woody, M'Lord A. You may be misunderstood; then again, you may not.

Re Park Drive: I never took to the weed myself, but I well remember the furtively mumbled request uttered by the impoverished under-age smoker asking quickly and quietly for 'Five Park Drive'. Michael Bywater talks about this in his excellent book LOST WORLDS, rendering the request's haste and furtiveness as 'FiParDri'.

Hells Bells! Guess what you can still buy Park Drive and Woodbines. I have been hooked on Park Drive since the age of 11 (not proud of it) I'm 43. These days I have to walk miles to the shops that sell them. don't smoke that often, but every now and then i must have them. they taste so much better than nasty filter cigs.

I got my first electronic cigarette kit off of VaporFi, and I think its the best kit.

Did Park Drive cigarettes have a factory on Oldham Road Oldham