Find The Fault No 14 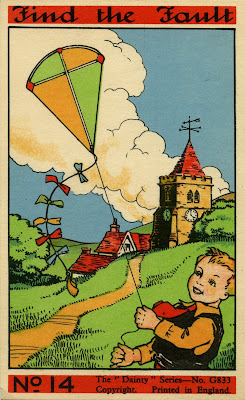 Good one this, I think. I won't go on about the slightly Hitler Youth-ish boy, or the fact that there appears to have been a nuclear explosion in the next village. Instead I'll tell you about kite flying at Anderby Creek in 1952. We bought a big red box kite for flying out over the North Sea, one of us being sent down to the shop every ten minutes to buy yet another ball of string. Being called in for lunch we didn't know how to keep the thing airborne without anybody tugging at the line, but my uncle went and got a spare rubber fanbelt from his pre-war Ford. He tied the kite string to it and attached the whole thing to the verandah railing of our bungalow. Round about apple crumble time the line snapped. The string by this time was so long we couldn't see the kite, but after lunch we scrambled down the wooden steps to the beach and followed the line of string virtually to Chapel St. Leonards. We never saw the kite again, imagining that by teatime it was descending in gentle looping circles into a garden in Antwerp.
Posted by Peter Ashley at 09:33

1.Wind direction - Southerly, blowing kite in Easterly pull. Could be to do with small boy's skill at kite flying.

Keep looking Diplo. But I've now got a feeling this one might be a bit contentious amongst kite flying afficianados.

I'm kind of assuming the kite string disappears up the far side of the kite and isn't tied at the base - very poor detail if he's got that in mind.

Hmm. I suppose I'm going to have to give it to you. To put your comment into the simple vernacular of the answers sheet: "String should be attached to middle of kite".

oh - you know what i mean - i just think he should have been a little less ambiguous in his draftamanship. You see, the string could well be fixed in the middle of the far side, unseen to us.

Ah, I see what you mean.

I always thought the string should be tied to the spar side to allow the cloth to billow out the other and catch the wind. So the fault as given is probably right..

But, actually, I think the real fault is that Farmer Goodcrop's haystack has been set alight (again) by his pipe knockings and according to the weathervane (S) the smoke's blowing in the wrong direction (in a westerly wind).

Bravo Diplo! Fast out of the blocks - and getting two of the more obvious faults. Most of you have missed that the clock is showing 4 o'clock on one dial, and 5 o'clock on the other which, with the Lagerglass 90 degree escapement mechanism used in most church clocks, is impossible.

Also the child has macrodactylyl and needs treatment.

I've got it - the lad is clearly wearing lipstick.

Blimey, you lot are quick off the kite mark!

Blimey, Jon Dudley. Where have you been? Or shouldn't we ask?

Definitely looks like a German youth in the vicinity of an English church, on holiday perhaps? My mother has the Hummel figurine that he was obviously sketched from.

I always get Hummel mixed up with Humbrol.

Well, knowing next to nothing about kite-flying, I'd assumed it was to do with wind direction too. Either that or the lack of anything to stop the loose bit of line just slipping out of the child's fingers and letting the kite escape.

A very timely image, anyway, as the Blackheath Kite Festival was last weekend (although I managed to go at a point when almost no kites were airborne).

Here I am, late again.

Hummel was also a composer. (The name means 'bumble bee'. As some wag commented: 'What can you expect of a composer whose name means "bumble bee"?'.)

The Blackheath kite festival is brilliant - wish I'd been there.

But all this kite-flying stuff is a bit of a diversion. The real answer to the fault-finding conundrum is clearly: church incorrectly oriented - west tower is at east end.

I'm curious to know what macrodactyl is.. Is it unusually short arms?

..or am I being more than usually credulous? Whatever..Its a nice word and should be in a medical dictionary.

I always thought a macrodactyl was a small dinosaur.

According to the on-line medical dictionary,Macrodactyle means having long finger or toes. Wierd,but there we are. I'd go with small dinosaur.

I think we should stop concerning ourself with some ghastly child's fat fingers and concentrate on the clock. A village clock showing two different times is serious: one is either an hour late for everything or an hour early. Personally, I like a nice glass of oloroso at 1 o'clock prompt and, if I lived in this village, I would either be unable to concentrate by the time Martha Kearney came on the wireless, or malnourished by having to wait an extra hour for my mid-day muffin.

In that respect Camilla, a broken clock that does not tick is at least right twice ever 24 hours. Like the classic Spike lines 'Do you have the time?' 'Yes. It's written on this piece of paper' 'But that can't possibly be correct' 'It was when I wrote it down!'

Good day! This is my first visit to your blog!

We are a group of volunteers and starting a new project in a community in the same niche.
Your blog provided us beneficial information to work on.
You have done a extraordinary job!

What a stuff of un-ambiguity and preserveness
of valuable know-how concerning unpredicted emotions.

Take a look at my site; Wholesale Jerseys Cheap