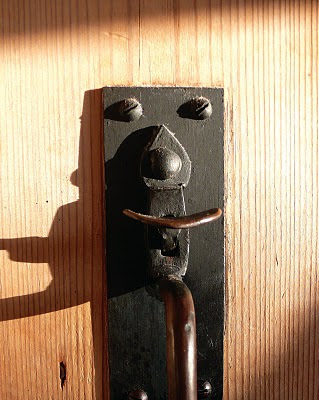 What's that word again, the one that's for when you start seeing faces in inanimate objects? Like Hitler in a half-bitten McVitie's plain chocolate biscuit. Incidentally, I looked at my almost finished piece of toast this morning (Waitrose Seeded Batch, Wilkins Tiptree), and noticed that it bore a remarkable resemblance to a map of England and Wales, my last bite being Cardigan Bay. I was going to blog it but ate it before photography could commence. Anyway, this is a door latch at Ashley Towers in winter sunlight.

If you look at the latch shadow on the left, it looks like a man in a top hat sticking out his arm and leg.

It's Fred Astaire in the shadows!

You're both in the right place, but look at the light area around the shadow.

The light chap with flat forehead and open mouth reminds me of the face Blakey off of On The Buses pulled when making his 'waaagh' noise at Butlah and Co.
Presume this is the other face you saw P.A.?

By the way, the word my Yorkshire-Lincolnshire grandparents used for this kind of door latch was 'sneck', a marvellous, expressive word, I always thought. When I was a small boy I imagined that these latches only existed north of the Watford Gap, since our house in Gloucestershire had no 'snecks'.

That's the one Office Pest. And thankyou Wilko for your Vernacular Guide to Door Latches.

yes - well this of course all complete bollox. Great door latch, beautiful light, actually very good photograph. Can we leave it at that ? Ooh look - a shape on the road that looks like a flat dog - silly me, it is a flat dog.

Carry on - just being difficult.

...and there is a beer, a winter warmer, called Sneck Lifter brewed by Jennings. Yummy.
http://www.jenningsbrewery.co.uk/beers/beer.aspx?bid=9

Thankyou Diplo. And it's spelt 'bollocks' not 'bollox'.
Jennings, Tankard. Isn't that from Cockermouth or somewhere?

Yes, near Cockermouth (calm down, calm down), and the stuff can be bought online too. Thanks for the link, Tankard.

This post reminds me of looking for those 'hidden messages' in the artwork of rock music album covers.

I actually thought the dog was K9, from Doctor Who. Wilkins Tiptree, mmm yummy.

The word you were looking for, peter, was anthropomorphism.

peter - your spelling correction noted.I came up with "x" spelling in an attempt to be hip and trendy, to eschew the OED and "proper" English in favour of street speak, init. As middle age slips gently away I have decided to join a gang, where a hood and instal and outrageous sound system in my Triumph 2000PI shooting break - powerful enough to knock my elasticated flat cap off my head as I tease the woofing thing with my string and leather driver's glove. Carry on.

expat - I've always known them as Suffolk Latches - how weird's that ? I wonder if a Herefordshire, or Cheshire latch is any different.In fact they're all the same and we've been fooled into thinking our own little corner of the world had something special, something unique to be proud of. Oatcakes, on the other hand - Staffordshire please.

Wait...there's more! Top left...it's an Easter Island head, shot from the rear and slightly over the left shoulder with a different nose...unmistakable.

...and in the real world .... we should note the joiner's attention to detail in setting the plate screw slots at the same angle - that's proper that is, Lutyens was a fanatic of course and I'm sadly rather keen also.

You're right Jon. Maybe the Virgin Mary will now appear on the shiny bit of the thumb plate. And Diplo, I always do my screws at the same angle. If you get my meanin'.