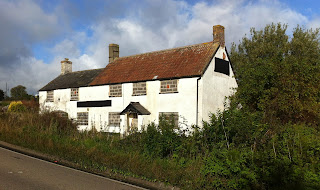 So, there we were bowling down the A303 on the way to Cornwall, more of which later. Suddenly we came to a screeching halt at the end of a queue for roadworks traffic lights, on that stretch leading down to Honiton that is more like a trunk road from the 1930s, after those gloriously sweeping dual carriageways across the Wiltshire downs. We called this The Blind House, and after taking a quick snap through a break in the incessant traffic we carried on. On our return in the gloom and rain of a late afternoon, we looked more carefully out for it. All I know is that it's after Honiton but before a crossroads I think was Eagle Cross. So can any of you out there remember what the pub was really called? Indeed, have you partaken of drink in there, or pulled out in front of someone from the car park?

I know this building and have been past it on my bicycle many times. I'm sure I also remember it being featured on BBC Spotlight when the new A30 was opened, which syphoned a lot of traffic from the 'old' routes. I want to say it was called the Halfway House, but I could well be wrong. There are several other 'Halfway House' pubs in the area though, so searching is a bit tricky.

Thankyou Alistair, that sounds like the sort of name. I must have been by it when it was open, perhaps it was half way between Honiton and Yeovil.

It looks a bit tragic, doesn't it. What has gone so badly wrong for pubs? Have people stopped drinking or have they taken to drinking elsewhere?

So sad, so sad, these old abandoned boozers. It would take a long essay to answer Hels's question, but the topics covered would include brewery takeovers, changes in drinking habits, mobility of customers, the increase in the number and variety of restaurants, and more.

I too must have passed this place, but do not know its name.

The price of beer, the smoking ban, the improvement in home entertainment, the drink-driving laws, the crackdown on underage drinking...

So sad to see a derelict pub. It's a vanishing species. But we have attempted to buck the trend with our English Pub in a German Cellar.

Jolly good to see you back and blogging, Peter!

Apparently approximately seven pubs close a week. Better get down to mine quick.

Pubcos are part of what's gone wrong.
However a glimmer of hope is being fanned by the community pub movement, of which there are now a few examples. The pubcos buy up pubs, stick in mangers who are then penalised if they start to become profitable by being charged massive rent increases. Result, the pubs close and the owners prove they're no longer viable and they are either converted to private dwellings or the sites are redeveloped. Sorry I couldn't throw any light on the boozer in question though.

I think that is the Hillside Café at the top of Ham Hill... I have vague memories from my childhood (in early 70s) of being stuck in a traffic jam in the same spot sitting in the back of my dads Mk1 Ford Cortina

Peter, The figure of pub for closures has been around for some time, as the number of pubs has decreased one asumes that the rate of closure will decline, or alternately one could project forward to the day the last pub closes.
Everyone says how sad it is that pubs are closing for all the reasons put forward, but pubs need regular customers not the occasional visit when it suits people to go. It is a bit like churches that are expected to be there in the community but to which most people do nothing to support.

I recall this place was once featured on "One Foot in the Past" on the BBC around the time it first closed and before they breeze blocked the windows. I certainly remember driving past it many times en route to the W Country before it closed but sadly never calling in.

This was indeed the Hillside Cafe, and was not a pub. I ate there in 1972 when it was thriving and a busy cafe. We were driving westwards to Cornwall, so actually managing to perform a right turn into the car park on a hill on the A303 in the height of Summer was
something of a miracle. My abiding memory of being there was that the owners had several
kid goats running around outside in the garden while we were eating. Health and safety wouldn't allow that today!

Are you making money from your exclusive shared links?
Did you know that Mgcash will pay you an average of $500 per 1,000 file downloads?

Did you know that you can earn dollars by locking special pages of your blog or website?
To begin just open an account on Mgcash and add their Content Locking tool.