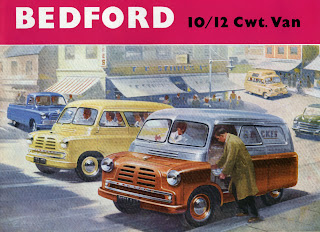 I'm sorry to be continuing this motor show fugue, but don't worry we'll soon be back with rusty Castrol jugs and phone boxes falling over. It's just that an eagle-eyed commentator has noticed a Bedford van in the background of my Husky photograph, and I just had to ferret-out this 1956 sales brochure to share with you. I have said elsewhere that I thought the illustrations made the van twice the size, which I can now see is untrue, but it is still a remarkable coincidence that the street scene contains nothing but other Bedford vans and a token Vauxhall Cresta from the same Luton stable. This is the first vehicle I ever drove, an uncertain and under-age passage down a Northamptonshire lane with my Uncle John leaning over and wrestling with the steering wheel and column change gears in tandem with my own nervous efforts. Gripping an untipped Player's in his teeth.This was a wholesale paint delivery van, but the brochure tells of many variants including personnel carrier, canopy pick-up, milk float, gown van and of course the ubiquitous Dormobile. Many colour variants are shown, my favourite being a duotone mid-blue and cream. The picture shows a uniformed man delivering red tulips to a lady standing in the porch of a posh house. Heavy wistful sigh.
Posted by Peter Ashley at 09:47

Highly nostalgia laden picture - as to be expected, thank you. It does not pain me in the least to admonish the vehicle itself (and of course its variants rightup to the CF). These had to have been quite the most ill-conceived, poorly engineered, shockingly styled, hazardously un-driveable and ugly vehicles ever to hit the tarmac. Lord how we miss 'em.

The sound of one of those sliding doors being slid is one of the lost noises of England. It ranks, in my opinion, with the sound of cash registers, bells on shop doors, the clack and ting of manual typewriters, and other mechanical sounds now lost in a world of digital bleeps and synthesized muzak. R. I. P.

Oh how I love this post! There is a CA for sale on ebay even as we write....it is rather more expensive (numerically) than a new one was in 1922 (or whenever). Even allowing for the pound being now worth a tenth of what it was then, it is still a BAD buy!!!!

Great stuff. I lived in fear of the sliding doors on these. Our friends the Smiths had one with slatted bench seats and sliding windows in the back. There were four Smith children, two Savages and loads of other kids too. In the summer we'd all go off to the zoo, or the park, or the pool, with all the doors and windows back and the wind rushing through the van. I was convinced that a door would un-latch itself and chop something off. Fortunately, we all grew up with a full compliment of fingers, toes and heads so my fears proved to be unfounded.

Brace yourself folks. I have a picture somewhere from the first roll of film I ever shot; Kodachrome 2 in 1964. It's here in the metaphoric shoe box somewhere. I'll post it and draw tears.

What did you shoot it on Toby? Hope it was a Kodak Retinette.
I bought one in Rochester a few years back, and after I'd excitedly got it home I found out that wretched Kodak no longer did the film for it. But it does make a nice talking piece on the Unmtigated Mantlepiece.

Found it!! Nothing to do with Jeeps, but it's up there. Bantam Colorsnap 2 for your info. justin will no doubt comment when he sees it, though he was only 8 at the time I shot it.

Peter, you've reminded me of an episode of love at first sight whilst on holiday in Lynmouth a few years ago. The object of my desire was a tatty Dormobile in burgundy and cream paintwork, driven by an old couple who had probably owned it from new. Not the best vehicle for long distance motorway driving - likely to be chugging along at a grumpy 50 mph (if you're lucky) - but it won my heart.

I am so glad to trigger happy memories of past love for you my Ladyship, and that the object of desire was a steady old Dormobile rather than one of those flash Volkswagen Devon Conversions.

Wonderful: I too had my first go at driving down a narrow country lane in one of those Bedford vans (in 1958), and bought a diesel one in '72 when I dropped out and went to live in a commune.