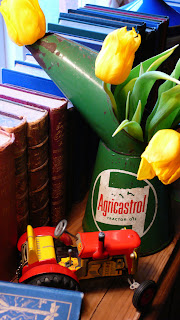 Alright, here it is. I'm not going to say anything more about it, other than to say that I publish it as my Valentine's Day card to all my readers. The girls at any rate. Well OK, blokes as well.
Posted by Peter Ashley at 11:05

Great jug, Peter; thank you for sharing. Smashing tractor too. Schuco? Or did you stay at home? Snarf.

Czech Zeta, Justin. By some unpronounceable Iron Curtain-type manufacturer. I've got the tin trailer that goes with it, for which I cut six lengths of new growth hazel to look like a load of logs. As you do. They are held in by little tin chains, and the whole thing is clockwork. I think I'll get it going tonight, whirring round the kitchen table.

Wonderful. I especially like the idea of the hazel twigs in the trailer. The Art Director on Thunderbirds used an orange squeezer in the launch bay of Thunderbird One. It's spray painted silver and is attached to the wall of the set. Well worth looking out for, should you find yourself watching re-runs. (They do re-runs, Ron, they do, Ron, Ron.)

Ooh lovely jug - I have one similar, a blue Fina one that lives on the garden fence. Shame I don't have a car of the same vintage...sigh.

Lady Barbara. I am honoured that you should even deign to glimpse at my blog. And not only that, but to own up to owning a Fina jug. I think Fina was a sub-brand within the Regent portfolio, of which you may be interested to know of my Dinky Supertoys petrol tanker. I shall get it out now and gaze at it with renewed interest.

Is that tractor a Zetor? Probably made in Brno (national shortage of vowels in Czech Republic). I'll look out for a full-size one next time I'm in Central Europe.

What great contributions this thread has elicited! I was always a huge fan of Lady Barbara's late husband, Red, but I hope she will not be offended if I observe that a vulgar Belgian brand (Fina) doesn't really compare with a true British brand.

you're treading on very thin ice there af-a, whilst I appreciate the Bulldog sentiment I feel we ought ot be embracing our european cousins more enthusiastically - if only out of a sense of sympathy. Our dear friend Geedubberyuh has taken it upon himself to be understanding of the Chinese stance on the problems of the African Continent so I feel the least we can do is cheer on Poirot, Chocolat & Leffe. i

Yes...a lot of truth there Diplomat, and my rabid nationalism overcame my love of Belgium for a moment. Particularly for the two Chimays: ie Blue and Race Track! But quoting from "www.ianbyrne.free-online.co.uk/fina.htm": "Never a major retailer in any country (it ranked fourth in even its home market of Belgium)......Fina succumbed to a merger proposal (in reality a takeover) by the French company TOTAL". A sort of metaphor for Belgium itself really!

on the button as usual - "Citroen Prefere ..." etc

All this, from one second-hand oil jug and a bunch of tulips. I shall have to have a lie down. Not before mentioning Jacky Ickx, another great Belgian. Ickx, as any fule kno, won Le Mans six times. In 1969 him and Jackie Oliver (not Belgian) won by 120 yards. I imagine his Ford GT40 was topped up with oil (Gulf) from a very similar jug to the one that started this thread.

Ah now - Jacky Ickx eh ! He was well known for scaring the pants of other drivers in saloon car racing at the Nurburgring by screeming up behind them in a massivly over-weight, under-braked 500 Merc. God help you if you didn't get out of the way.

Big Mercs! Now you're talking. For one very happy year I ran a 450 SEL 6.9. Far and away the most entertaining vehicle so far. Not the fastest, certainly not the best handling but, as I say, the most entertaining. My ex described it thus: 'looks like a Greek restaurateurs car'.

It was a sudden nail-varnish green and it went like stink. They made just over 10,000 of them, mostly for America. 285 came here. James Hunt had one. I had one. A Greek restaurateur had one.

I took mine to the Fens on a speculative trip to Flamingoland to promote one of our shows. It had snowed heavily and the propaganda said 'stay at home'. Well, they all listened so I had the roads to myself. An epiphany. That car was very, very, fast.

Philip you're right, sorry everyone. It's a Zetor tractor. I was getting mixed up with Michael Douglas's missus.

Is Michale Douglas married to Sarah Ferguson then?

You know i mentioned elsewhere that my brother-in-law met Douglas Hurd in th bogs at Daymer Bay - he also met another MP there once, I think it was Malcolm Rifkind or whatever his name is.

Were these meetings in bogs pre-arranged or merely fortuitous?

Catherine Zeta Crystal Meth. The only tractor to marry Kirk Douglas and end up in rehab.

I once met Malcolm Muggeridge in a lavatory in Inverary. By accident, I hasten to add, and before anybody asks, neither of us removed any lightbulbs. He said, in that inimitable voice "Frightful day isn't it" (it was stair-rodding down) and after I'd mumbled a typically non-commital teenage response he pissed on one of my shoes. (Black velveteen winklepinkers.)

My mate Rock'n'Roll Mick met Joe Walsh in a bog once: 'How's the Maserati Joe? Learned to drive yet?'. And he escaped with shoes un-splashed.