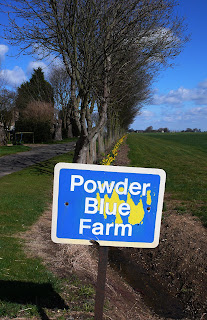 Out on the Fens again, and a discovery on a back road between Eye and Crowland. This is one of the distinct pleasures of keeping one's eyes open in this, some would say, featureless landscape. Apart from there always being something odd out of the corner of the eye there will also be the names: Teakettle Hall, Whipchicken Farm, Dog Drove South, Dog Drove North. And so Powder Blue Farm. At first I thought it was simply a farm named after a favourite on a colour swatch, perhaps there'd also be a Fowler Pink Farm, a Lamp Room Gray Rectory. Then it occurred to me that Powder Blue might be a local name for the Holly Blue butterfly, here right on the edge of its territory. Thank goodness for Edward Storey's The Solitary Landscape. Storey tells us that woad was grown around here right up to the late-eighteenth century, and the French Huguenots were the only ones prepared to take on the unpleasant task of grinding woad into the blue powder sold as dye to the clothing trade. They would have called it poudre bleu,and their presence is also still remembered in the names French Farm and French Drove. But the condition of this sign still suggests to me that Prairie Gold Yellow Farm might break through at any moment.
Posted by Peter Ashley at 16:16

A speaker at some worrying fen bash arrived late and excused himself along the lines that he had got very lost and confused into driving around for hours on account of all the villages called "pick your own".

Am I imagining it, or was there something to do with OXO cubes here a few minutes ago? I always like 'Seldom seen farm' on the way out to Tilton on the Hill. Then there's 'Crafty Flats Lane' in South Derbyshire that I pass on the way to my Accountants.

Yes, what happened to the Gorman piece?
Living in 'Cold Comfort' farm country we have our share of "Wildernesses' and even a 'Murder' farm too. Lucky man, we must re-visit The Fens. it's a long time since my uncle was rector of West Walton church which has its own separate bell tower such is the unreliable nature of the land. The church hall posessed a giant two-spouted enamel teapot I remember...but that's another story and inolved a wedding.

Sorry about the missing Gorham Every now and then I think something hasn't worked as well it might, and in this case the images didn't do justice to his craftsmanship.

How odd, Jon, that your uncle was rector at West Walton. Not odd for him of course, but today I photographed the detached tower at Tydd St.Giles, only the third I've seen apart from West W. and the bell tower in Brooklands, Kent. (Cue theme music from The Twilight Zone.)

Well it was a bit odd for him as he'd just returned from what was Rhodesia where he'd been a 'missionary' for donkeys years-the difference must have been astounding. Tydd St Giles separate tower I've never seen (any chance of a picture?), although Brookland isn't so far away and situated in that wonderfully mysterious part of Kent. I'm sure Gorham's work (carelessly spelled by me last time - sorry) will re-appear.

ah - missionary for donkeys eh ? that reminds of a tale. Uncle of mine was a missionary and making his way across the high veldt on a mule, he came across a river, swollen by recent storms, and was trying to plot a crossing point. On the far bank was a gang of horsemen waving furiously and offering directions across. He followed their "left a bit, steady, right a bit" and eventually scrambled up the far bank. Expecting the others to move off with him on his journey he was suprised to see them pile into the shallows and re-trace his track back across the torrent. It seems my uncle was not the first traveller thay had used to help find a safe way across for themselves - a cattle herder had been washed down streem only an hour before taking "instructions" from the horsemen. MORE FLOODS.