A Picture for Lily 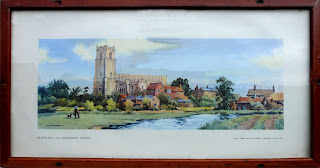 Lily isn't her real name. In fact I never knew it. She was a lovely old lady (at a guess I would think nearly ninety) who yesterday afternoon got on my London-bound train at Bedford and sat next to me. She had come to Bedford for the funeral of a chap she had helped bring up in care, many years ago. No-one at the station could be bothered to find out where the cemetery was for her, and so, very confused, she decided to return to her tiny flat in Roehampton. Enter the "ticket collector" with a silver ring in his ear. Lily showed her return ticket, except it was the London-Bedford half. She thought she'd given the return half in by mistake at Bedford. She hadn't. After searching fruitlessly in her bag she became distressed, and Silver Ear demanded her credit card. It took at least three attempts at inputting her pin number into a grey lump of plastic he kept thrusting at her. I intervened, and said surely the fact that she had the other half went someway to prove her innocent of fare-dodging, unless she enjoyed going from Putney to Bedford twice in a day, just for a laugh. Finally he was able to relieve her of £21 (she'd already paid £12.90 return). After he'd gone I calmed her down and helped her look for the ticket which she then found. I went in search of Silver Lining and he'd got off at Luton Parkway, so thirty backpackers who'd just got on for St. Pancras never got their tickets checked anyway. At the terminus I took Lily to the ticket office where they shrugged their shoulders and gave her a long form to fill in to get her money back. Doubtless there'll be a box to tick that says "How did we do?". For the record, this is the newly-enfranchised East Midlands Trains, motto "Travel All About You". With illiteracy like that, what can we expect?

The picture for Lily is of a 1950's railway carriage print of Blythburgh church in Suffolk. Railway companies put four of them in each compartment, this one's in its original wooden frame. I'm sure she would have enjoyed them on her journeys in the past, but more importantly would have been shown patience, compassion, and that now much mis-used word 'respect'. I hope you got home safely Lily.
Posted by Peter Ashley at 11:14

What a lovely tale, and heart-warming that you did something.

I wonder if you did it humming that great soneg by The Who?

Actually...I really mean this ...it's beautiful...imagine what it would've been like on a day like that in the local pub ..with all those pommy Sheila's putting it about as only they know how to do it ...phwoaaw

Alois: WHERE HAVE YOU BEEN? And what have you done to Camilla?

Warm PB: I am just too mesmirised by your portrait to say anything.

Frankly, Peter, I'm a little worried you didn't do more to help the old dear. The scene I have set for myself whilst reading your post, has you hiding behind your paper listening to the Silver Toothed scally-wag rail-bully, hoping that this nastyness would all go away without inconveniencing youself. Why you didn't get up straight away and half-nelson the little shit out of the window is beyond me - how on earth do you expect these corporate rogues to mend their ways if you don't act promptly and with exagerated harshness. MORE ACTION !

Teninchwheeler: Thankyou for your thoughtful and concise appraisal.

Diplomat: Do you honestly think I didn't consider doing just that? I was readily supported by the two passengers in front of us should anything kick-off, but we later thought that the hermetically-sealed windows and doors might have hampered our pitching him, and his body-piercings, out at Kentish Town.

For what it's worth I think you did a splendid job. Poor old trout, we show little enough respect for the elderly without their being bullied by the likes of Johnny the ticket inspector. On another matter, being castigated for not exposing personal details...I'm quite happy to do so but being new to this blogging mularkey don't know how - any assistance gratefully accepted. As for Mr.Warmpommybeer....anyone remember Barry Mackenzie of Private Eye fame? there are unmistakable similarities.

Barry Mackenzie. B.Humphries words, Garland's drawings. Just before this time Humphries was in the habit of getting on Melbourne-bound trains and finding a compartment with a single lady in it. His companion-in-crime would get on at the next station, find Barry (who pretended not to know him) and start kicking him furiously to the floor. When the lady tried to intervene, Humphries would shout out "Forgive him, for he knows not what he does".

That'd have been in his Dadaist period then.

Did the twat have a name badge? Presumably the morons have something like "Sean - here 2 help U!"

Did the twat have a name badge? Presumably the morons have something like "Sean - here 2 help U!"

Ron. Early onset is it?

Ron. Early onset is it?

Ron, Early onset is it?
Peter, If only Lily had been a Hell's Granny. She could have sorted the little shit out herself. In such cases I always take comfort from the words of my Hungarian neighbour, George, who willl say, with a strong Hungarian accent, " I tell you vot mate, he wouldn't walk again". Those that have met George will understand. He has a Facebook profile under 'George Popodoppolis'.

Modern Life Is Rubbish is the title of an album by Blur, as I'm sure you know. They saw it written on a wall and nicked it. It pops into my head every time I see a pub replaced by an All Bar One or a Starbucks.

Ah, Blur, of course. Sorry I didn't recognise the connection.
I love Park Life, staple of my three year sojourn in Chiswick, mainly from my son singing it to the neighbours every night.

Modern Life's Not Rubbish at all. It's fantastic. It all depends on your point of view.

Thankyou Fred, you've just reminded me to put the dustbins out.

Peter,
I am alive and well, just blog resting. There seem to be a lot of newcomers lately. Is the clique membership increasing?

Ron: Early onset is it?

From what I can make out Tommy, they're genuine welcome non-clique newcomers, although Warmpommybeer needs looking into. I have my suspicions, in an Antipodean direction. As a result some more blogs are being put before the Unmitigated Committee for inclusion in my Blogs-I-Like.